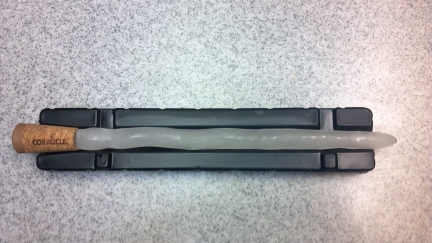 Gadget Review: Corkcicle by Corkcicle (the Company)
Purchased at: Bevmo
Cost: $22.99 at Bed Bath and Beyond online  (no longer available at BevMo)

Expectation/What it Means:
For a white wine, the product should slow the warming process that normally happens when a partially full wine bottle is left at room temperature.

It also claims to chill a red wine from room temperature to proper serving temperature (although based on the type of red wine, that could be a broad range).

The premise is that it will work much like putting several ice cubes into a glass of wine to keep it cool but without the side affect of diluting the wine.

The Process and Measurements*:
We used 2 bottles of a mass produced Chardonnay (Kendall Jackson Grand Reserve).  Because we were testing temperature only, wine characteristics were not important.  Measurements were taken every 15 minutes for both bottles.

Each bottle had about ½ glass of wine removed, which was the maximum amount possible while still allowing the thermometer sufficient submersion to read properly.

Care was taken on each measurement to place the thermometer in the center of the bottle so touching the glass would not change results.

Bottle 1 – Standard Cork/Control
This bottle represented what would normally occur when serving wine. It had the wine cork that came with the wine in it at all times except when measuring the temperature.

Bottle 2 – Corkcicle
The Corkcicle was use in this bottle instead of the wine cork. The Corkcicle had been in the freezer for more than 24 hours insuring that it was completely frozen.

The Results:
The Control Bottle stayed within the acceptable drinking temperature range for a relatively brief 18 minutes. After that it became too warm and would have required some sort of additional cooling to return it to the correct serving temperature.

The Corkcicle bottle actually dropped slightly below our recommended serving temperature for several minutes but it was for a short enough time, that had a glass been poured when it was at the lowest temperature, it would have warmed appropriately in several minutes. Allowing for the brief drop in temperature, the Corkcicle Bottle stayed in the acceptable temperature range for 45 minutes or 2 ½ times as long as the Control Bottle.

Surprises:
I guess it’s time for full disclosure. I really didn’t expect to like this product. It looked pretty insignificant compared to the bottle. So does size really matter? Apparently so in this case. Looking at the Corkcicle, I didn’t think it was large enough to make a real difference in a full bottle of wine, but it is. Any larger and you would have to remove a significant amount of wine just to avoid a massive overflow problem when you put it in the bottle – something that I neglected to do the first time, resulting in a wet counter,  wet floor (and a happy dog before I could get it cleaned up). Thankfully it wasn’t a prized bottle so no harm done.

If you don’t expect too much from it, like keeping a bottle chilled outside on a hot summer day, the Corkcicle is very functional.

Would Winery Sage Recommend This Product?
Again, surprisingly, yes. It’s small enough to leave in the freezer without making a serious dent in your storage space so it is practical to keep cold all the time.

Our only concern is the quality of the cork used as a stopper.  We didn’t have the opportunity to stress test it in several hundred bottles so we’ll have to take at face value that the producers had the forethought to make it durable.

Just don’t expect too much from the Corkcicle and you’ll likely be happy with it. It’s not an ice bucket so it won’t chill white wines to the correct serving temperature. You’ll also be disappointed if you are hoping to keep a wine chilled in a blazing summer day in Phoenix,  irrespective of the locals claim that  “it’s a dry heat.”