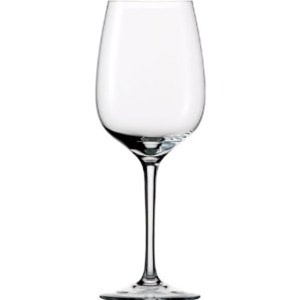 A wine poured into a breathable glass for just 2 to 4 minutes will show signs of aeration equivalent to the same wine that has been decanted and aerated for 1 to 2 hours. The original character and structure of the wine are preserved, yet the wine’s aroma and palate impression become more open and generous.  Note that this is what is listed on one of Eisch’s reseller’s web site.  Due to reasons noted later in this post, Eisch can no longer make these claims.

Eisch now states,”The Eisch Sensisplus Glass, which was first introduced to the market in 2005, had created a revolution in the wine world. Eisch Sensisplus Glasses bring the positive attributes forward – delivering all the complexity, aroma, and fruity undertones that the wine has to offer.”  This of course is a pretty general claim (not to mention pointlessly vague in describing what the glass is supposed to offer).

There are few wine accessories that generate the amount of debate as “breathable” glasses.  It has even spilled over into the courtroom.  Rival glass maker, Riedel brought a suit in Germany against Eisch.  The gist of the matter is that in 2010 Eisch settled out of court and agreed to stop using the term “breathable glass” or “opens bouquet and aromas within 2 to 4 minutes”.  Of course Eisch Marketing folks have attempted to find creative ways of getting around this (just take a look at the “Advertised Purpose” section above, although frankly, their new statement is pretty vague to any one who doesn’t actually know what the glass is supposed to do).

The Eisch glass purports to give the benefits of allowing the wine to breathe without having to take the time to actually allow it to breathe.

For our first (and primary test) we used a relatively young (4 year old), full-bodied Cabernet Sauvignon as the official test wine.  Over several subsequent days, we then tried it with other wines.

If you have read any of our other reviews:

The Process and Measurements*

The process is pretty simple.  We followed the guidelines that Eisch used to tout in their ads before the lawsuit.  We poured two glasses of wine, one in the Eisch glass and the other in our typical large bowled glass that is quite similar in shape to the Eisch glass.  We waited four minutes and tasted the glasses.

We immediately noticed a difference in the wines from the two glasses.  We both felt that the wine in the Eisch glass tasted smoother as if it had been decanted for some time before.  The standard glass tasted, as you’d expect – a little harsher and the tannins were quite pronounced.

Great, we had a successful first test and thought we had found a cool product.  I have the patience of a two year old in a toy store so anything that gets me close to instant gratification is a good thing.  We had planned on doing the same test over several nights and with different wines but this first test was very promising.

However…drum roll please…not all, was as it seemed.  Although we hadn’t planned on it, the wine continued to sit in the Eisch glass for about 30 minutes while I took care of a couple of things.  When I came back, the wine in the Eisch glass tasted oxidized.  Karen confirmed my observation.  We poured more wine out of the bottle and let it sit in the standard glass for 30 minutes.  Hmmm….no oxidized flavor.

We tried the glass over the next several days and with different wines and found roughly the same results.  There was a definite benefit for a short period of time but usually in less than ½ an hour, the Eisch glass tasted like a wine that had been opened for a day or two and not correctly preserved.

Surprise number one – we actually didn’t think that we’d see much of a difference in the two glasses but there was a marked difference.  In our informal tests, the wine did appear to improve quickly.  However, it also appeared to degrade quickly.  That was surprise number two.  We stumbled upon it by accident.  In retrospect, perhaps that shouldn’t have been a big surprise.  When a wine breathes, it’s exposed to oxygen, which starts the process of oxidizing the wine:

Surprise number three was its lack of durability (at least in our kitchen).  The glass only lasted about six weeks because it broke while we were washing it.  I don’t know if this is the nature of the type of glass that Eisch uses or we just got one with a weak spot but I’d certainly think twice about buying more given the price.

Another point we thought about after the glass broke.  What happens when you put an already aerated wine in it or a more mature wine that doesn’t need to breath at all?  Will the glass actually damage the wine?  In fairness to Eisch, we never tested this one.  It’s just a question that remains unanswered.  We were unimpressed with the glass and stopped using it.

Would Winery Sage Recommend This Product?

Ultimately, we recommend products that we kept going back to and use time and again.  After using the Eisch glass for a couple of weeks, it was relegated to the back of the cabinet and only used when we needed to tap into more wine glasses because we didn’t like the total effect it had on the wine.  We tried it a couple of more times (usually because we had run out of other good wine glasses) and it always had the same result.

Ultimately, we really wanted to like this product (we’ve already established my total lack of patience, something about which my wife and kids always like point out).  It’s a cool idea given our society’s obsession with instant gratification, but we just can’t do it for the following reasons:

There are lots of reviews of the Eisch glass.  The majority of them think it’s a great product.  Obviously we didn’t but we are in the minority.  I would encourage any one that is thinking about spending this amount of money on a set of glasses to do additional research.  Only one review that I saw indicated that they allowed the wine to sit in the glass for an extended amount of time (as we did) and they didn’t see the degradation that we consistently experienced.  We can’t explain why there were such drastic differences in our findings but we felt ours were very consistent.

Ultimately, we think decanting the wine or using one of the aerators on the market yields more consistent results and is certainly a lot cheaper.  Six Eisch glasses cost roughly $200.  We have to question the value of them, especially if our glass only lasted six weeks.

If you are considering one of these glasses, we recommend that you buy one and test it yourself.  Everyone is different and ultimately, you will be the best judge for your tastes.

Ongoing Reviews for Breathing and Aeration

The Eisch glass did get us thinking though.  Quick methods for getting wine to breathe are all the rage.  Over the next several months, we’ll be publishing product reviews that include blind tastings comparing wine using a number of aerating devices to non-aerated wines so check back and see which one comes out on top.  We’ll provide links from each review to the next one in the series once they are published.

Disclaimer and Winery-Sage.com Practices When Reviewing A Product:
Winery-Sage.com does not take any endorsements or funds from manufacturers whose equipment we review.  We attempt to impart all of the facts as we’ve observed them (the Good, the Bad and the downright Ugly).  We may interject a little irreverence now and again but hopefully you’ll see that our experiments are based on scientific methods and try to rely on several opinions when the results are subjective rather than measurable.