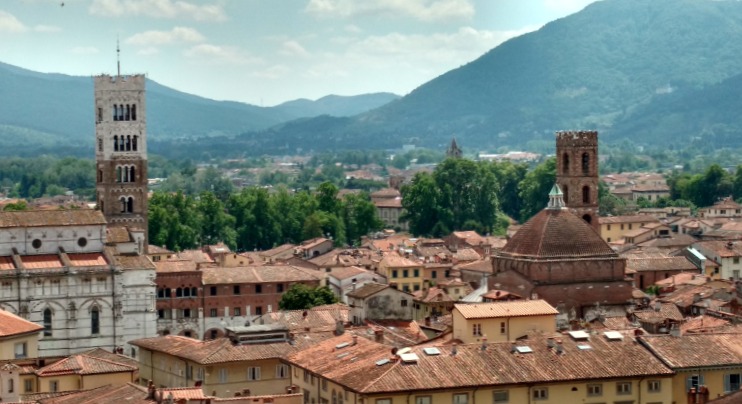 The View of Lucca from Guinigi Tower

Lucca was a one day stop over between Cinque Terre and Tuscany but it turned out to be a real find. It’s completely surrounded by the medieval walls and the tops are wide enough for biking, which we did the morning we left. Our Hotel was on the main Piazza which took the shape of the roman amphitheater that once stood there. They eventually tore down the amphitheater, but kept the resulting space as an elliptical piazza.

Lucca has over 100 churches, which seems like a bit of an overkill when you think about its relatively small population of about 90K. We investigated the largest and most interesting and then Danny and Ken climbed to the top of the Torre Guinigi (Guinigi Tower for those of us who are not well versed in semi archaic Tuscan Italian), the highest in Lucca for a birds eye view of the city. Karen’s knees were not up the ascent but Danny happily scampered around at the top taking picture from various views. Ken also climbed to the top but with his apprehension regarding heights (probably more accurately described as abject terror) stayed firmly rooted as close to the center of the tower as possible. Another gluten free pasta meal for Danny! Now we know what to look for, this is getting easy.

Interestingly Shaped Bread in Lucca – They Do Know How to Get Your Attention In Italy.

The next morning was Karen’s birthday and she wanted to do the aforementioned bike ride before we left for the more well known parts of Tuscany. Karen and Ken have always wanted to go to Tuscany (well who doesn’t?) so it seemed apropos that we arrive there on her birthday. Rather than staying in one of the bigger cities like Florence or Sienna, we opted for a smaller town roughly between the two called San Gimignano. What a great decision that turned out to be. The town was one of the highlights of the trip and we stayed at a small hotel that was once a Villa about 5 kilometers outside the town with a stunning view of its medieval skyline. San Gimignano is known for its medieval towers – at one time there were 57 of them within the town walls. 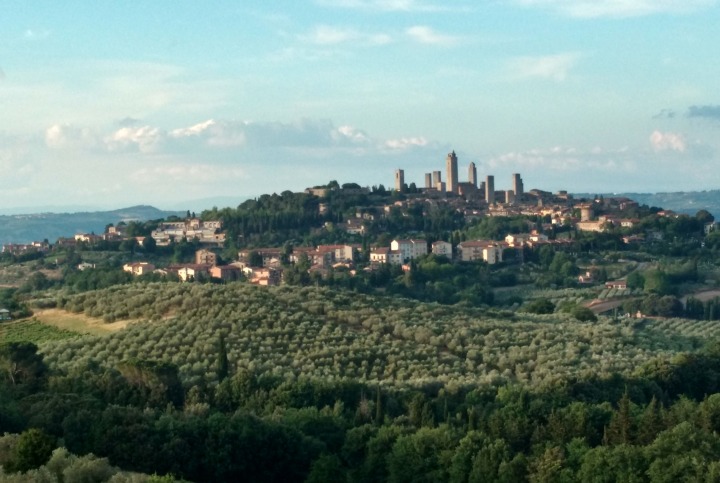 The View of San Gimignano from Our Hotel Room Balcony

Karen’s birthday dinner was at a Tuscan steak house where they serve a curious piece of meat called a Florentine steak. It’s a single piece of meat; roughly the size of a Rhinoceros’s backside. We were forewarned that it is served rare…really damn rare! My mom likes steaks that could be brought back from the dead by a vet according to my father. 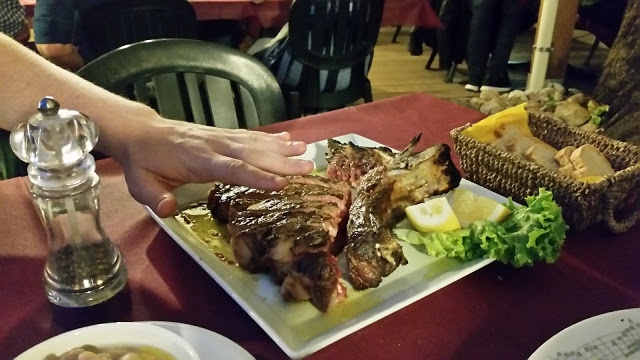 They wouldn’t have needed a vet for this one. Unfortunately, Karen had a kind of disappointing filet for her dinner. Danny tackled the Rhino butt with a little help from Ken. Once the meat is eaten they take the baseball bat sized bone back to the fire, cook it again and chop it into 4” pieces to chew on. Those were quite tasty. 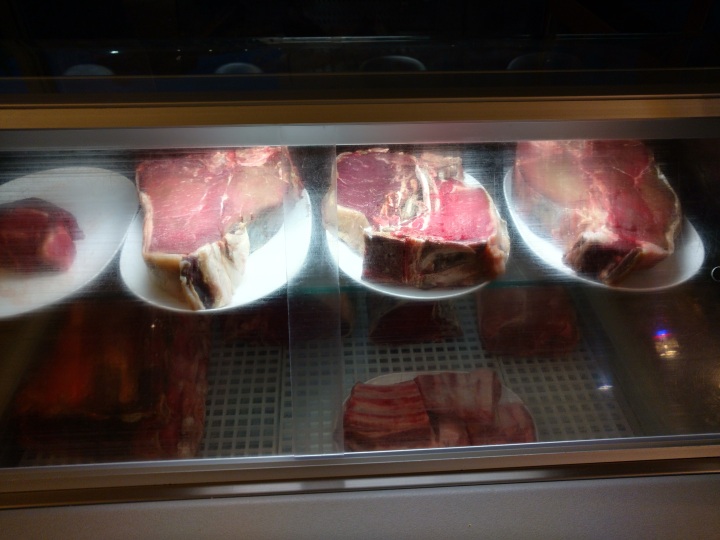 Florentine Steak Before Cooking in San Gimignano. It Doesn’t Look Any Different On the Inside After Cooking.

Back to the hotel to find quite an international party watching the sunset outside consisting of a Canadian, a Scott, four Germans, two Aussies and the three of us. We planned on an earlier night but that went by the wayside. That seems to be a recurring theme this trip.  I blame the 23 year old.