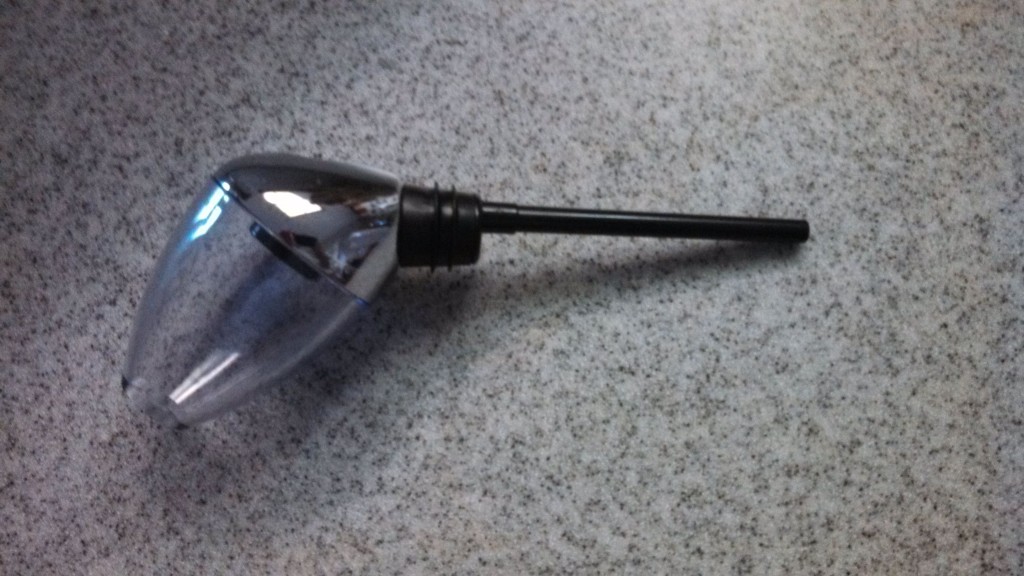 Introduction:
This is the third in our series of aerating devices, designed to quickly and effectively aerate wine. The Rabbit is one of the most well known devices so we decided to it would be the guest of honor at our next test.

Advertised Purpose by Metrokane, The Manufacturer:
You don’t need a decanter. You don’t need a separate aerator (so awkward to hold above the glass as you pour). Simply insert the Rabbit Aerating Pourer into a wine bottle as you would a conventional pourer. When you pour the wine, you see and hear aeration happening. When you taste it, you enjoy the enhanced flavor and bouquet of perfectly aerated red wine. The Rabbit Aerating pourer is the first easy, uncomplicated way to aerate wine.

Expectation/What it means:
It’s really pretty straightforward. Pouring the wine through the Rabbit is supposed to cause the wine to breath as if it had been opened for a substantial amount of time.

There is also no doubt that they are taking a direct shot at the Vinturi, arguably the most popular wine aerator, by claiming that holding another device and pouring wine through it into a glass is awkward….hmm. I think I’ve held a glass and poured a liquid into it since I was quite small and I don’t seem to recall any catastrophic results. I’ve even managed to do it while slightly buzzed at college parties (ok…maybe more than slightly buzzed). I mean, I know it can be quite difficult to do two things at once…kind of like walking and chewing gum.  Subtle hint…I think this insinuation is beyond ridiculous….ok, maybe not too subtle after all.

If you can’t tell, I got a little jaded when I read the implication that pouring wine through another device was tough. Frankly, it’s a silly claim and insults the intelligence of most wine drinkers. Thankfully, I didn’t read it until I just started to type up the notes from the blind taste test, close to a week afterwards. Even though our tests are blind, I would not have wanted to be biased one way or the other.

The Process and Measurements:
We administered a blind taste test to four red wine enthusiasts to see if they preferred the wine aerated with the Rabbit as opposed to the wine poured directly into a glass from the newly uncorked bottle. The glasses then sat for roughly five minutes while our son recorded the labels to insure that each person had one “Rabbit” and one “control” glass. We assume that because he is in college, he probably has the most experience drinking so he is well qualified. Each glass had a unique label (“A” though “H”) to insure that no one could pick up on comments made by some one else about a glass with the same label. However, the tasters were free to discuss what they thought while tasting because no one knew which glass was which.

So what determines a success?  Simple, is it easy to tell which wine tastes better (presumably from the device)?

The first thing I noticed when pouring through the Rabbit is that this is a messy pourer (ironic considering the claim that it was easy compared to the Vinturi). The wine really splashes coming out of the Rabbit and the entire inside of the glass is covered. If you are just having a casual glass with a couple of friends, who cares really? However, if you are trying to put on a nice presentation, it does look sloppy. It also posed the main problem for the test. It was obvious which glasses were poured with the Rabbit and which were a straight pour from the bottle. Two paper towels and some judicious wiping of the inside of the glass later, the test was good to go. In theory, we could have just swirled all the glasses to make them look the same but we didn’t want to introduce any additional aeration so that was out.

The Results:
Our first impressions were that there was not much of a difference in aroma and the first tastes confirmed the opinion. This was going to be a tough test. We allocated five minutes to formulate our opinions and we needed almost all of it to try and deduce which was which. The results…50/50.  Yep…toss a coin and guess which is pretty close to what we ended up doing.  Frankly it was so difficult to tell the difference we ended up making what we thought were educated guesses but even those guesses weren’t very good apparently. There was just not enough of a difference to easily tell one from the other.

Surprises:
After our Vinturi test, we expected all four testers to be able to easily pick out the Rabbit Aerated wine. We couldn’t have been more wrong. There was virtually no difference between the “rabbitized” glass and the straight un-aerated version.

One other minor surprise was that it didn’t fit snugly into the bottle. It seemed a little loose and I was worried that when I was pouring the wine through it, it was going to come out and we’d spill much of the bottle. In fairness, it never did and it might have been perfectly secure but I wasn’t confident.

Would Winery Sage Recommend This Product?
No…four experienced wine enthusiasts couldn’t tell the difference between a wine poured through it and one poured right from the bottle. If you are going to use an aerating device, the effect should be obvious. If there was a difference with the Rabbit, it was so subtle that half of us got it wrong….hardly compelling results.

Qualifiers:
1) A 2009 Cabernet Sauvignon from Burrell School in the Santa Cruz Mountains was used. While it is a well balanced wine, just after opening it has some pretty aggressive tannins and benefits from 30 minutes or so of glass breathing prior to enjoying it. The test was administered with a single bottle to avoid any bottle variation.

2) The temperature of the wine was roughly 60 degrees when the experiment took place, at the upper end of our recommended temperature range for Cabernet Sauvignon. If you have questions about why a room temperature wine wasn’t used, we suggest that you read our serving wine page on the main Winery-Sage.com site.

3) Ambient temperature was quite hot, in the mid low 80’s.

4) When we evaluate a piece of wine equipment, we usually try and design a test that produces measurable results. In this case, tasting a wine to see how it has changed is very subjective so we decided to tabulate results using four different tasters to give us more than one opinion.

5) Identical glasses were used for all tastes to eliminate variability.

6) Each taster normalized their pallet by eating a peace of bland French bread to avoid any after tastes from previous meals contaminating the results.

Disclaimer and Winery-Sage.com Practices When Reviewing A Product:
Winery-Sage.com does not take any endorsements or funds from manufacturers whose equipment we review. We attempt to impart all of the facts as we’ve observed them (the Good, the Bad and the downright Ugly). We may interject a little irreverence now and again but hopefully you’ll see that our experiments are based on scientific methods and try to rely on several opinions when the results are subjective rather than measurable.