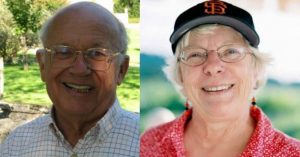 My blog posts are usually quite bit lighter than this one, but looking back at 2016 has left me feeling decidedly morose this morning.  2016 sucked – there really isn’t any other way to look at it. Terrorist attacks, the passing of a number friends and celebrities and an almost historically reviled election, made 2016 seemed to last for decades. Thankfully though 2016 really was only one year long. Yep, as bad as it was, it was still only a year – just 366 days (I bet you forgot that 2016 was actually a leap year so 2016 actually had an extra day to inflict its woe upon us).

So here we are, apprehensively peering around the corner to see if 2017 will be a kinder, gentler year, full of happiness and hope, or just another one that occasionally sucks the joy out of life but time goes on either way. That’s the intrinsic quality of time. By its very nature it’s cyclical. It just goes on and on. Cycles are an integral part of wine as well -whether they’re short, like the cool nightly fog cascading over the Santa Lucia Mountains which imparts complexity to the vines, only to give way to a sun that gently warms the Pinot Noir and Chardonnay – or longer like the growing cycle of vineyards. A seemingly dead vine, bereft of hope until the promise of spring begins to bud like a phoenix being reborn, gives sudden life to the vine. A nurturing spring leads to summer where the clusters slowly mature as they ready themselves for yet another harvest.

Life is also cyclical and this year, Karen and I were reminded that life is far too fleeting. Too many people we know are battling illness (Christian, Christine, Tom…we think about you often) or have recently succumbed to it, most often cancer. Two were “wine people” who helped shape or helped reinforce our wine passion.

In March of 2016, Karen and I took a wine cruise through the estuaries of Bordeaux, France which are well chronicled in our blog posts. The last day of the cruise, we had the pleasure of tasting at Chateau Kirwan, a third growth Chateau in Medoc, France. Chateau Kriwan was founded in 1710 and is a family run winery by the Schÿlers. Jean-Henri Schÿler, the patriarch set the stage for the family winery entering the 21st century, having reacquired it from a series of banks. Jean Henri formally entered the wine industry at the age of 22 and from that time helped shape the family business and to some extent, the modern Bordeaux region. His daughter, Natalie, was our host at both a wine tasting and lunch and we were fortunate enough to sit at the table with Natalie and listen to her stories. We never met Jean-Henri but it was clear that his spirit imbued the entire operation from the efficiency of the wine making process to the geniality of the wine tasting staff. We sat, listening to Natalie impart snippets of wisdom gleaned from over 300 years of wine making culture and realized the successes, challenges and fears for the future are often, not too different from the concerns of new world wine makers. This was easily Karen’s and my favorite winery of the trip and so when she saw that Jean-Henri had passed away, we were both touched even though we never met. He was responsible for a memory that we will keep until the end of our days.

The wine “friend” who we just lost was Anne Moulton of Burrell School winery. Anne and her husband Dave, the wine maker at Burrell School, are probably the most responsible for our passion for wine (as well as a sizable hole in our bank account). In the late 1990s, Karen and I had always liked wine and enjoyed bringing visitors to several wineries of the Santa Cruz Mountains. One day, Burrell School was recommended as another good winery to try. The quaint, red school house greeted us with a welcoming atmosphere and a small tasting room in the old carriage house which wasn’t large enough for an enthusiastic summer crowd, so Dave was pouring wine out on the deck. Each wine was better than the last, but the wine epiphany was the 1999 Cabernet Franc. That wine was the one that sucked us in. It was the first “Holy crap, this is phenomenal” moment that we had with wines. Up until that point, wine was always nice but hardly a passion. Soon after, we became wine club members and as the years went by, we got to know all the staff at Burrell School but particularly Katrina, the tasting room manager and Dave and Anne. Tasting after tasting, wine event after wine event, Burrell School felt more like our local watering hole and Anne, with her ever present glass of Chardonnay was a fixture…always smiling…always gracious…always happy. Sadly Anne passed away shortly after being diagnosed with Hodgkin’s Lymphoma. Anne was the modern definition of a Renaissance woman. Apparently her GPA through school was so high you would need a degree in calculus just to understand it. She spoke at least three languages, was an avid reader, a gardener and a traveler. Oh yes, and she also raised two daughters and planted their first Chardonnay vineyard which allowed her to say that she really did get to enjoy the fruits of her labor.

Burrell School will still feel like our home winery but just a little less homey without Anne reminding everyone that no matter how bad life looks, it’s always better when you are “happy, happy, happy ”.