The first day in Venice, we just walked around all day and got a feel for the city. There are over 400 bridges, each linking what was once an island to the next island. The Venetians slowly filled in the gaps between the islands so that only the canals remained. 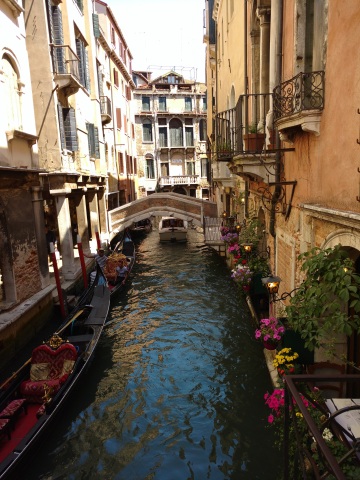 Just Another Canal in Venice

We split up for lunch because Justin and Allison saw an open face sandwich that looked really good to them but Karen, Danny and Ken ate across the small road at a general Italian restaurant. An ongoing theme of our Venice meals was Danny trying to order seafood risotto but all the restaurants only made it for two people due to the effort. Instead, the fish special looked good to him even through it was for two people (Danny likes to work out and as a consequence can eat for two). Enter gullible tourist sucker practice number two…always ask the price of the special. In the US you are usually safe about not being gouged. ..apparently, not in Venice. Karen and Ken’s meals were pretty reasonable but imagine the surprise when the bill appeared. Holy Shit! After checking the bill, imagine the surprise when it included a charge for 86 Euro for the fish special. Do you know how many glasses of wine we could have in Italy for 86 Euro? Sure it was a good special but for that, the damn fish should have been able to shit gold bricks for us. Clearly it was prepared by an Italian master chef, flown in especially from Rome on a chartered jet with a military escort just to prepare Danny’s fish. Who knew we were that special? Well, lesson learned but damn that was painful. A great pasta meal for diner followed (our first of many I assume) but Ken now knows just how pathetic his homemade ragu meat sauce is compared to the real stuff…damn…this trip is going to be tough on the ego.

The next day we had a 4 hour tour with an American who has lived in Venice for 20 plus years who can give you more of the insiders scoop on how the city works and some of its history. It was pretty good. We had no plans for the rest of the day so we found a small local bar and proceeded to watch a never ending slew of overpriced gondoliers rowing their customers (perhaps victims is a better word considering a gondola ride costs 80 Euro for 30 minutes). 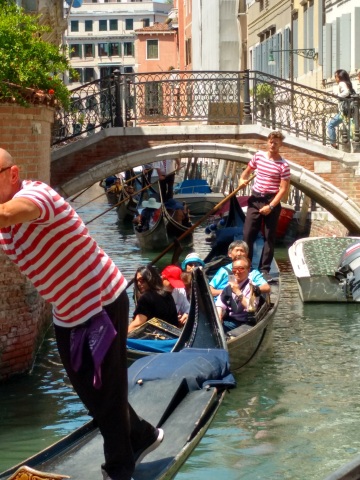 We probably sat for 3 hours having multiple glasses of wine, Aperol and Compari spritzes. Karen and Ken headed off to go back to our flat while the young-uns went off to find a spot more conducive to millennials. It was supposed to be an early night because Justin and Allison had an early flight the next morning. I’m not sure if Danny was the whole instigator or if Justin had a hand in it as well but an early evening turned into an early morning arrival back at the flat for two of the three. Danny showed up about 30 minutes later after realizing that Mom or Dad couldn’t go to sleep until everyone was home because you needed a number of keys to open the gate, outer door and inner door to the flat. There was only one set of course. Oh well what is a family vacation without a few irritating moments?