View of Notre Dame from the Seine.

It seems silly writing an entire post about Paris.  We are likely the last people we know to come here so most of what is in here is probably just a recap of what others have already done and seen but what the hell.  This is as much for us when we get old and forgetful (and those of you who would argue that we’re already there, bite me!).  We got to Paris uneventfully because we got out of Belgium 18 hours before the terrorist incidents in Brussels.  We were met by our friend Christian Selosse.  We’ve known Christian’s family for close to 30 years and his girls all came to spend time with my parents to help learn English.  Paris is a beautiful city (no real news there) but having a local’s perspective on it was fantastic.

The old Paris architecture is stunning and it’s everywhere because there is an ordinance stopping skyscrapers in the downtown area.  If you are not going to go vertical a la New York or London, there is no reason to tear down beautiful old buildings.

On the way from the train station, we saw the Arc de Triomphe which was built by Napoleon to commemorate many of his battles.  It’s huge and there is likely the biggest roundabout on the planet encircling it.  I’m not really sure how you would get to the base to go up in it.   There’s probably some underground walkway because otherwise it would be a real life video game like Frogger where you try to avoid the speeding cars without getting flattened (for those of you that are too young or old to remember Frogger, here is a link to a video showing the game).  The roundabout that circles it has 12 roads leading into it and at least enough room for 8 lanes of traffic but just to mess with tourists, those lanes aren’t marked and staying in one lane seems to be a supreme act of  lunacy because I never saw a car actually commit to a single path.  Driving in it seems to be a cross between the Daytona 500 and Ultimate Fighting, with a bit of good old fashioned physical entropy thrown in for good measure.  Christian’s well practiced navigation led us through unscathed and we came to the Eiffel tower. 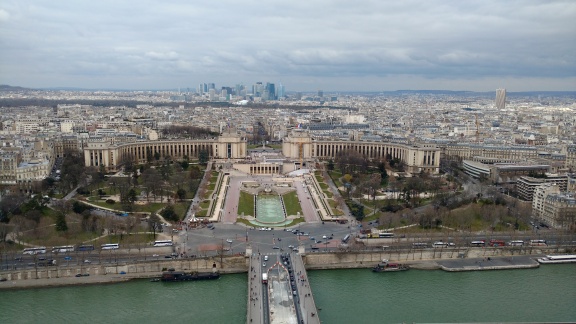 Part of Paris from the Eiffel Tower

It was pretty windy so they had the top platform closed when we started up.  Oh damn (insert heavily sarcastic remark here) and for those of you who know me, you’ll know that I like heights about as much as a cat would love being placed on a 2 x 4 in the middle of the ocean and pointed towards Hawaii being the closest landmass, with a gentle push.  The secondary platform was high enough for me.  I’m sure we were close to orbital height for satellites.  Abject terror aside, the view from even there was spectacular.

We ended day one with a one hour cruise on the Seine river with only a couple other people because the weather was starting to turn cold and everyone else wanted indoor cruising boats.  We passed a couple of them and they had so many people on them that I’m sure they had to lube everyone up with olive oil (forgive me…we are in France now…lube them up with butter), just to squeeze them all in.  It was a great way to see downtown Paris and between the boat’s commentary and Christian’s local knowledge, I don’t think we missed anything.

Back to Christian’s where we stayed in the friends room for the next 4 days and we got our first taste of a home cooked French meal.  It started with one of his cousin’s Champagnes (he has a few family members that are wine makers) along with appetizers and then the most amazing duck confite and white beans…are you kidding me…duck confit at home?  The look Karen gave me was, ” What the hell? How come you don’t cook like this for me?”  First Peter and Caroline with a phenomenal meal and now Christian.  I’m so screwed.  Cheese and bread for dessert and if you are in France, you don’t put the bread on a plate.  That’s what the tourists do.  Bread goes on the table.

Day two took us with Christian again down the rail line to the metro station near the Louvre on the small island where old Paris began.  First stop was Sainte Chapelle, a thirteenth century church and palace.  It isn’t on many tourists guides and damned if I know why.  It has what are probably the most amazing stained glass windows that I’ve ever seen.  We followed it up with a walk through Notre Dame, the best known of the old Parisian Cathedrals, also amazing but in a more majestic fashion. 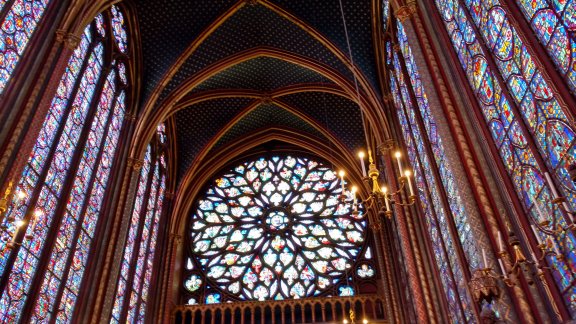 Christian needed to leave soon for an appointment but we had a great lunch from a Brasserie that served food from the Lyon region.  Being French, and knowing his stuff, we walked for about 10 minutes until he saw the type of place he was looking for…small amount of items on the menu, many of which change daily and locals on their lunch break inside.  Those were the keys to finding the good places rather than those that cater to tourists.

After Christian left, we walked through the courtyard of the Louvre and realized that it must be the size of Rhode Island…the place is just massive.  No wonder they tell you, to actually go through it all takes at least three days, and that is if you hurry. 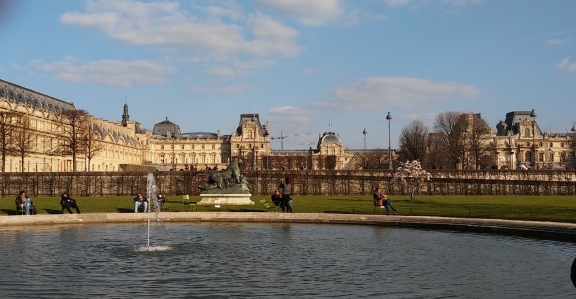 After that we began to walk down to where we were going to meet Catherine…pronounced Cau-treen for all of us Anglos (Christine and Christian’s youngest daughter) and her husband, Cyril.  The French have the coolest sounding names.  We wandered past a number of bridges over the Seine and took a walk onto the Pont des Arch bridge (also known as the bridge of locks to all of us yanks – it’s too much to explain here but here’s a link if you are curious) and then down the Champs- Elysees and in a roundabout way to the bar where we were meeting Caty and Cyril.  It took a little longer because we had to detour around the very heavily guarded and restricted American Embassy and French President’s palace due to the morning’s events in Brussels.  We had a really nice meal with them and I had my first taste of Armenac which is much like Cognac but from an area called Armenac (gee I wonder where they got the name of the drink from).

Caty and Cyril thought it would be best to take an Uber back due to potential issues with the train and all the security inspections after the Brussels event.  We were wiped out by the time we got back due to walking 9 1/2 miles on concrete that day (at least that is what the fitbit said).

Day three in Paris.  This was our day to walk around and explore the older parts of the city.  Parts of downtown Paris has been preserved  beautifully so there a number of areas to walk that are substantially the same as they were hundreds of years ago…except of course for the ever-present American tourists, innumerable scooters and foreigners of every description selling cheap souvenir.  We first walked around an area that Christian suggested called Le Marais.  It’s one of the older sections of Paris and according to many sources, has more pre-revolutionary buildings than any other area of Paris.  We walked past one stunning facade after another until we found the Place des Vosges, built by Henry the IV (the French king Henry, not the English King Henry the IV .  The Europeans were fond of Henrys.  I’m convinced it was just to confuse the Americans.  It’s a square of vaulted arcades with art galleries and restaurants.

The next stop was the Latin quarter, located across the Seine.  It’s a pretty misleading name because it really should be called the Greek/Turkish quarter now because all of the quaint cobblestone streets and shops are occupied by more Gyro and Kabob restaurants than could possibly reside in Athens and Istanbul combined.  It’s a bit like little Italy, with “charming” hosts standing outside most restaurants saying anything to get you to come in.  Aside from that, it’s a nice area to walk around with surprises around every corner…old churches, theaters, and fountains.

Our train ride back to the Selosse’s house was uneventful despite the heavy police presence until a group of annoying, young punks who clearly thought they were God’s gifts to humanity, jumped the exit turnstiles…and pretty much landed in the arms of a number of heavily armed police who were patrolling the station exit.  They police weren’t amused…poetic justice at its best!  Dinner was “Crepe Normal” , a surprisingly simple dish that is unsurprisingly, very tasty made by Christine.

Our last day in Paris constituted the trip to Versailles, a massive monument to the ego of one man, Louis the XIV.  It’s probably the most stunning structure we’ve ever seen and words just can’t do it justice. so I won’t even try but I’ll let the pictures do the talking. 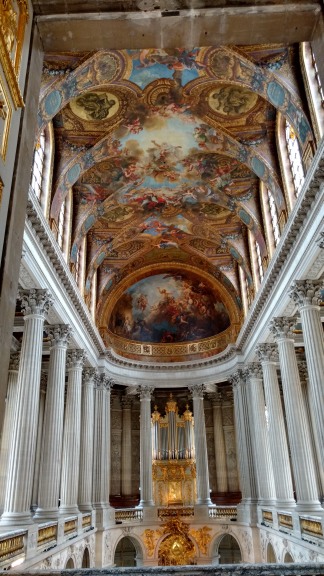 The Family Chapel at Versailles

We had a nice walk through the palace, unfortunately with a couple of really annoying tourists who were videoing the entire thing and thought nothing about barging right in front of you because clearly, their video is the most important thing on the planet. 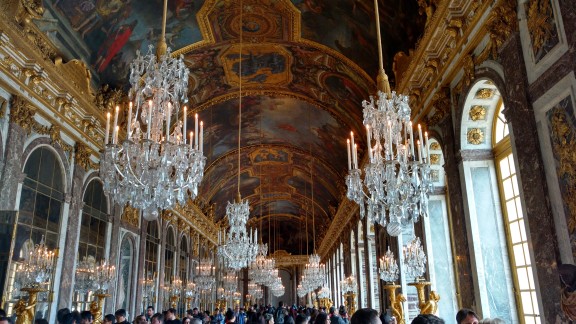 The Mirror Room at Versailles. Christian Held An Event Here With One of His Companies. It’s Good To Be King!

Surprisingly, they weren’t even Americans.  After the palace walk, we took a golf cart tour of the gardens…and before you laugh and insinuate that we couldn’t handle the walk, keep in mind they are probably bigger than a few third world countries, roughly 2,000 acres.  One of the coolest parts was the fountain that is reminiscent of the Bellagio fountains in Las Vegas…the only difference is that it is still working on much of the original mechanical pumps, not modern electric ones. 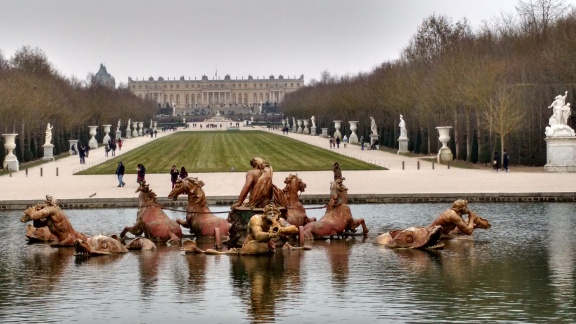 The Main Fountain at Versailles

Lest we forget our final evening with Christian and Christine, we had appetizers along with one of his cousin’s Champagnes which is one of the most sought after on the planet.  I could get used to living like this but I think Karen is going to have to find a really high paying job to keep me in the lifestyle to which I am quickly becoming accustomed to.  Just to finish ruining my wife for any future meal that I may ever cook again, Christian served a classic French dish called “Bird without a head” that isn’t a bird and never did have a head.  It’s ground and spiced meat wrapped with veal, a type of ham  and a forth type of meat that  I can’t remember and then is braised.  Sigh…I’ll never consider myself a decent cook again.

Oh…and one last afterthought.   Karen unintentionally grabbed Christian’s iPhone charger because it looked so much like our US to Euro plug adapter…oops.  We sent it back him as soon as we got home.

Thanks to Christian, Christine, Caty and Cyril for being such fantastic hosts.

Winery-Sage is an online Winery Encyclopedia designed to help you compare wines, wineries, and regions by using a unique database. Cross-reference varietals and the wineries that produce them, as well as discover events sponsored by wineries and associations. We’re not here to sell you anything or pass you off to paid advertisers, just share the love for wine.