This is part three of a series on the Wineries of Santa Clara County. Click here for part one and part two.

Explorers:
Karen – Ken
Check out their tastes and bios here

Winery-Sage.com Listings:
1) To view more information for the Wineries of Santa Clara Valley (the local regional association), click here and type “Santa Clara” in the “quick search” field to see their listing on Winery-Sage.com.

General Location:
Welcome to part three of our Santa Clara Valley wine blog. This section focuses on wineries that are east of Highway 101.  The last section … Sigh. Don’t get me wrong. We’ve really enjoyed tasting at the wineries in our backyard but we’d like to get back to tasting in a few other areas. If you missed parts one and two, we’ve provided links to them at the top of this page.

Details:
Unlike part 2 of this series where the rain was bruising, the wind was biting but at least the wine was inviting, the weather was perfect. Both days of part 3 were glorious – that typical California spring day where the sun is out, there is no humidity and the temperature was perfect.  This is why we put up with ridiculous property values and an unstable ground that likes to do its impression of a amusement park ride … Without warning. 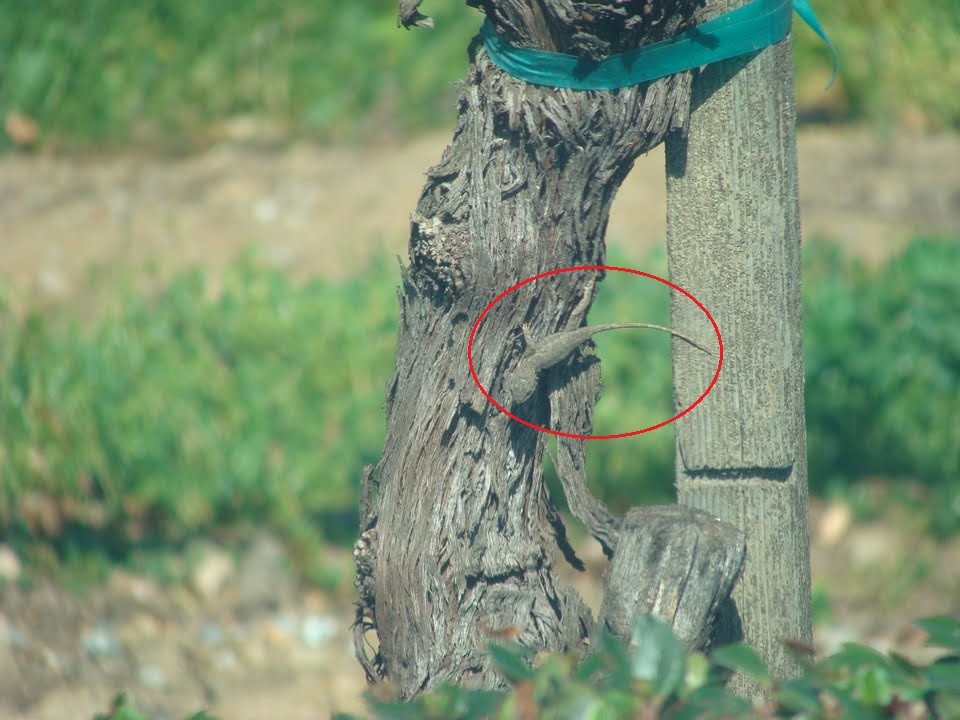 Our first stop was Guglielmo Winery, and this is not your father’s Guglielmo Winery. My first experience with their wines was over 20 years ago and I was given it as a Christmas gift. At that time they were known more for some of their fancy bottles than for wine. I remember the bottle 20 years later but what was inside apparently was eminently forgettable. I don’t even remember what type of wine it was. Fast forward 20 years and we had a totally different experience than what we expected. A friend of ours is their Marketing Manager and he was one of the first wine industry people that we bounced a concept off, that would become Winery-Sage.com. We met him at their tasting room several years ago and I remember thinking the wine had improved dramatically but you could see that it was still a work in progress. There were some high points but also a few disappointments still. Our most recent visit shows that the journey is still continuing but Guglielmo ‘s wines are continuing to evolve. 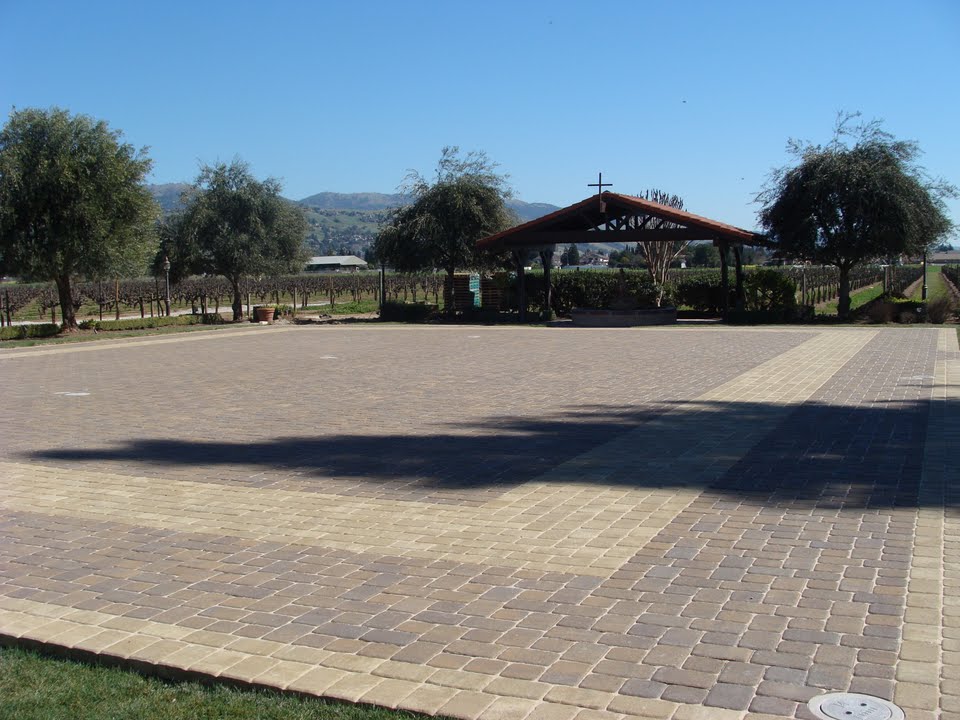 Karen and I both liked the Reserve Chardonnay, light, crisp but with a hint of Oak that was restrained enough that it didn’t scream “I’m a California Chardonnay.” The reds including a Sangiovese and Pinot Noir – a gold medal winner at the Pinot Noir shootout, were well balanced but lighter than many other wineries produce. A few of the Santa Clara wineries (Jason Stephens, Lightheart Cellars to name two) are embracing a lighter style of wine and allowing the subtlety of the fruit to speak rather than assaulting your pallet with everything that they could coax out of the wine-making process. Karen and I both like big bold wines but after tasting so many big, extracted wines, it’s nice to have a few on the other end of the spectrum for a change. They are just putting the finishing touches on their expanded event facility to make it usable in all seasons instead of just summer. For you shoppers, they also have an extensive store to peruse.

Morgan Hill Cellars is celebrating its 100th anniversary this year, a testament to Santa Clara longevity as a wine region. 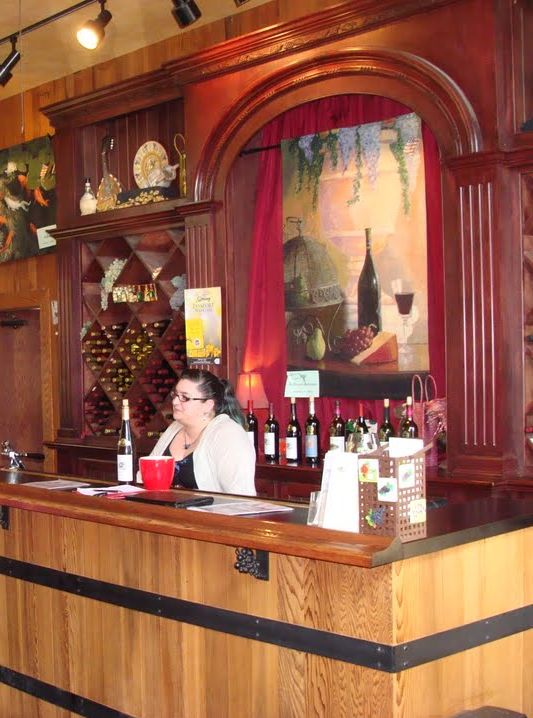 They specialize in sweeter wines. Karen found the Johannesburg Riesling refreshing and enjoyed the sweet finish. I’m not a sweet wine fan so in fairness to the winemaker at Morgan Hill, I’m not the most objective of tasters for them. The Merlot was interesting and would be quite a good wine for a group of people with mixed tastes. It had plenty of fruit for newer wine drinkers but also had enough body to balance it. They make a number of wine and fruit blends as well. Karen liked the Merlot-Blackberry wine but would recommend drinking it when you want something very sweet, not conventional wine. Their facility has a nice patio in back and for those that like to shop, there is a lot to choose from. 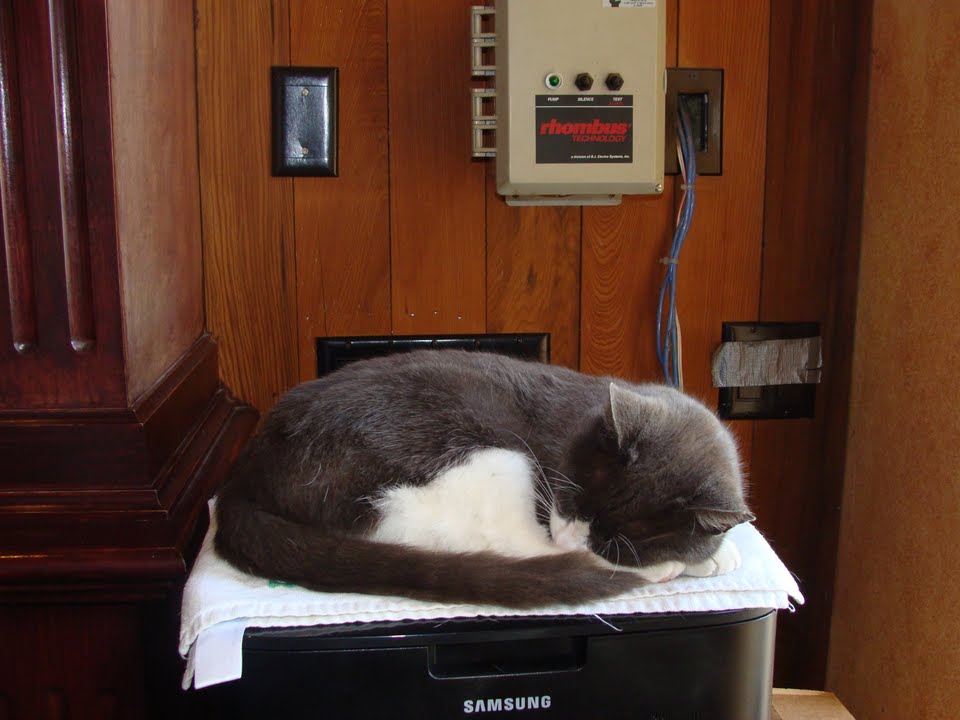 Rather than finishing the post in the next few weeks when many of the wineries were open (every third weekend for a few), life threw us a curve when Karen’s mom passed away after a brief illness. Thanks to those of you who knew what was going on and passed on your best wishes. Apologies to Guglielmo and Morgan Hill Cellars for this post coming out so long after our trip but as you can imagine, we suddenly had a different set of priorities.

When we picked back up during the third week in April, we started with Satori Cellars. The name comes from the blending of the family member names, Sandy, Tom and Riley and its decor is also an eclectic blend of colors and themes that really shouldn’t work together but some how, really do. If I tried to pull that off, it would look like a psychedelic clown exploded. The tasting bar is outside and has a southwest vibe happening. 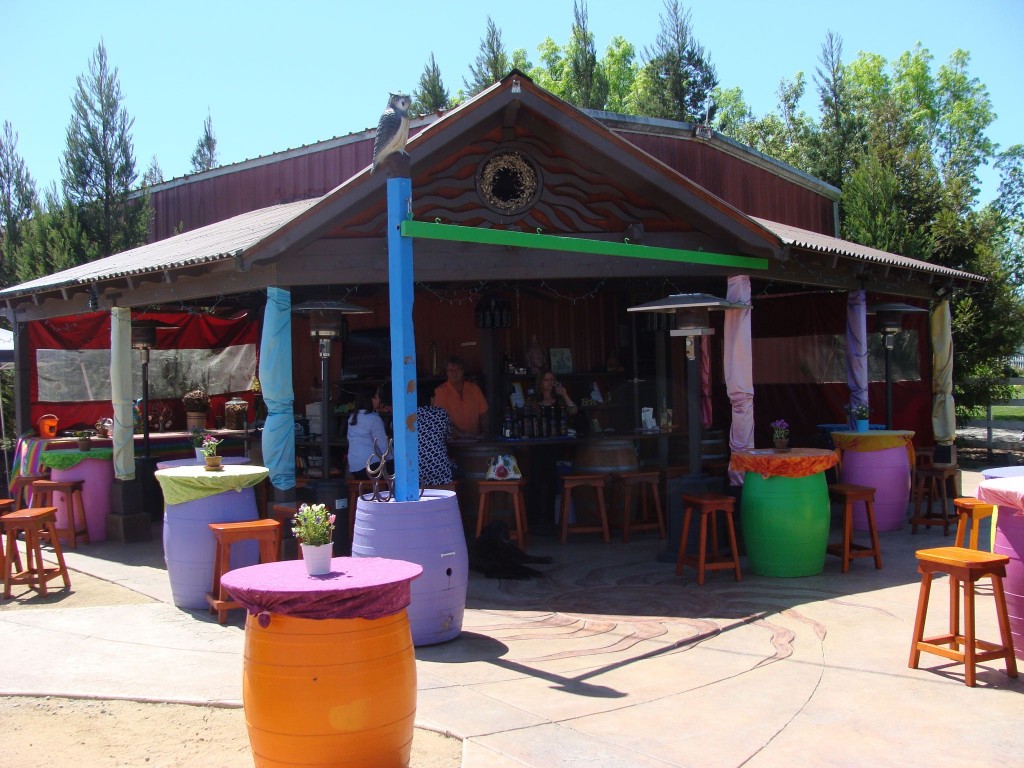 Satori – A Feast For The Eyes…& Taste Buds!

The owners, Sandy and Tom, were out of town but the very knowledgeable Howard knew we were coming and filled in. A word of warning if you are tasting with Howard (he’s the guy with the British accent); He likes to laugh so choose your moments to sip carefully! Normally at this point in the post we’d describe the couple of standout wines, but that is a little tough here. About three wines into the tasting, starting with the Oh – So Zin, Karen pronounced this her favorite wine so far. Roughly every other wine, she declared a new favorite … Harmonic, Petite Sirah Ha Ha (new favorite, new favorite … You get the picture). Her last new favorite was the Cabernet Sauvignon of the Blue Hand so I guess it wins. Most of these were gold or double gold medal winners in various wine competitions. I had tasted the Cabernet and as good as the others were, I knew it would be my favorite. Going on about each wine would be pointless. There wasn’t a dog in the bunch. If you like a little bit of spice in your wines, you WILL like Satori. One unusual wine was the December Harvest Zinfandel. It ended up being over 16% in alcohol but surprisingly, it doesn’t taste as sweet as most other late harvest Zins.

Next stop, Sunlit Oaks Cellars, a new winery that has only been open 3 weeks. Their “Tasting Tents” function as a great outdoor tasting room and there are ample picnic tables. The site sits just up the rise in the East Foothills, providing a great view of the rolling hills covered in grass all the way across the valley to the Santa Cruz mountains. 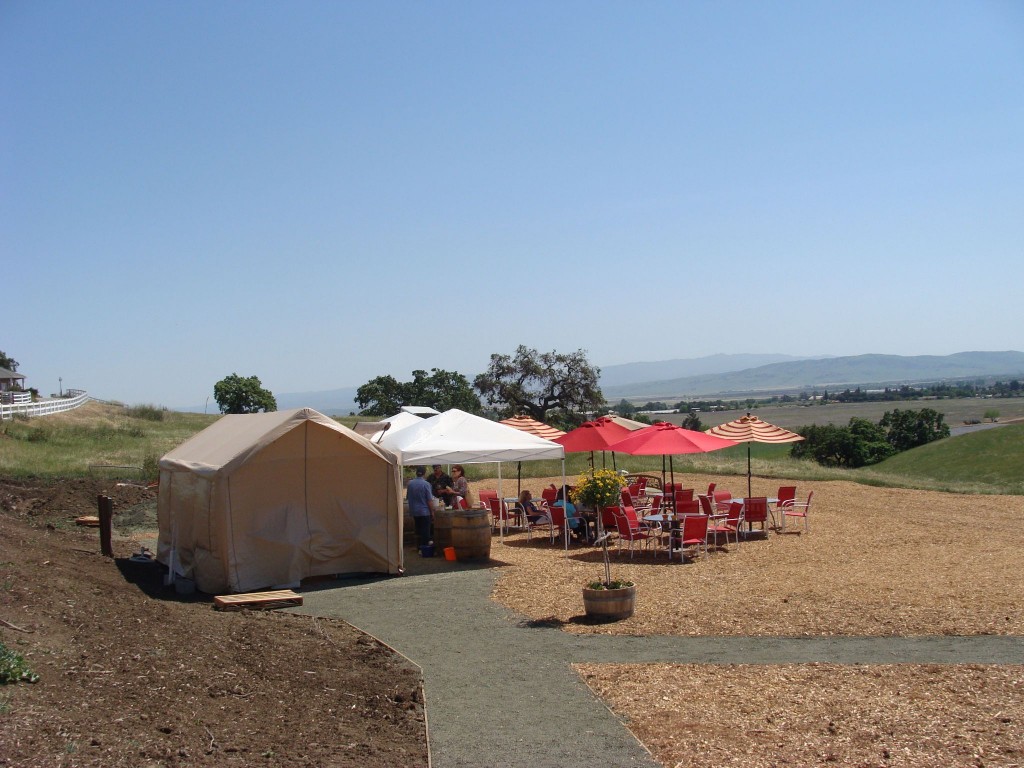 Tasting Under The Sky at Sunlit Oaks

Owners John and Rita Grogan have all of the enthusiasm of new wine makers and are quite friendly. Their total production is pretty small and they currently serve five different wines; Chardonnay, Syrah, Petite Sirah and a Moscato. All were good efforts for a new venture but the 2011 Pinot Noir was the star. It was very light with just a touch of a floral aroma but extremely well balanced. It was good now even though a little young but I think it will be even better in a couple of years. Unfortunately, neither Karen or I have any self control when it comes to lighter, well balanced Pinot so it will never last that long.

Thomas Kruse Winery is an entirely different sort of place. Tom was making wines in the ’70s before the real boom in boutique wineries started. We’re not sure what style he was making back then but now, his wines are some of the best quality we’ve had in the “affordable” price range. 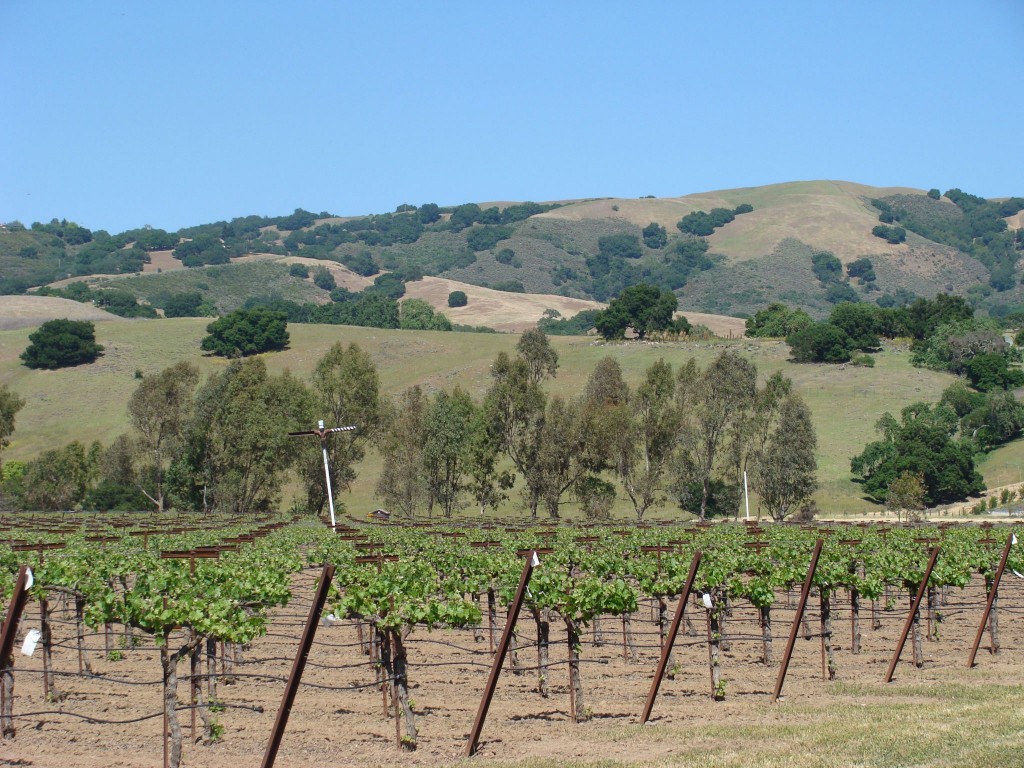 The View From Thomas Kruse Winery

I liked the Chardonnay and for $9 per bottle (case pricing), it’s a phenomenal value. I’d put it up against many that are more than twice the price. Karen particularly liked the Blanc de Noir dry Rose. Tom wouldn’t tell us what it was made from other than to say “Secret Sauce.” The case price on that is $6 per bottle. I’m not sure how he can survive on those prices but he doesn’t look like he’s starving so he must have the formula down pat. Surprisingly we both liked the first two slightly more than the Merlot and the Cab (odd given our normal preference for reds). The reds were good but the first two stuck with us a little more. Like every one who visits boutique wineries, we have our share of $40 + bottles of Cab or Pinot, but we have a son in College and we and just can’t afford to drink those every day. Thomas Kruse occupies a pretty rare niche for a smaller winery – good quality at extremely affordable prices. There are very few who do it as well as Tom. This was a diamond in the rough that we just didn’t expect. Sadly, we didn’t get as much time with Tom as we would have liked because a young couple came in from Chicago which is apparently Tom’s old stomping grounds … They were a nice couple but they named their poor dog Ditka after “Da Bears” coach of the 1980s. The poor pooch will be scarred for life. Terrible thing to do to a friendly dog!

Last stop, Creekview Winery, which doubles as the winemaker’s home. The tasting room is the beautifully landscaped back yard. 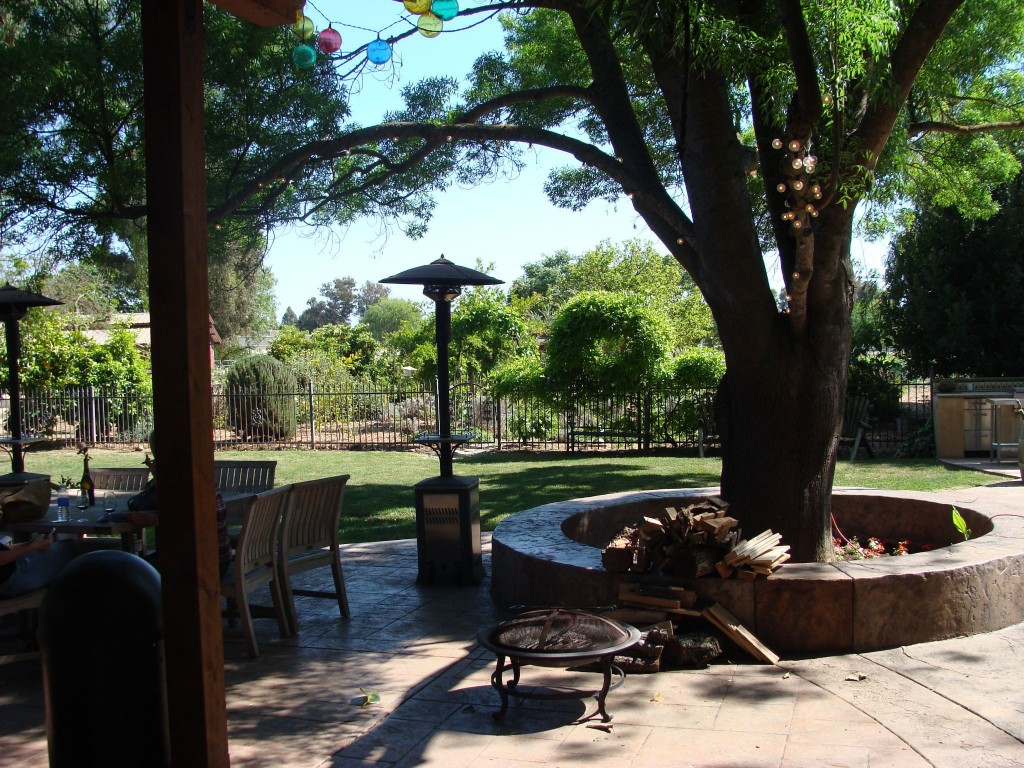 We’ve had Creekview wines before and really enjoyed them. The stars today were the Melodious which is a Bordeaux style blend, the Cabernet Sauvignon and the Harmonious, a blend of Syrah, Zin and Negrette. Karen was up to her old tricks about proclaiming multiple favorites (I’m glad she wasn’t that fickle when we started dating, or we might never have ended up getting married). I liked the Harmonious best but Karen had two favorites, it and the Cab. They also have a slightly unusual wine (at least for the Santa Clara Valley), an old vine Mourvedre. I generally don’t think much of Mourvedre by itself. It’s great in Rhone style blends with Grenache and Syrah but alone, I think it’s kind of a boring, single note wine. Mourvedre is the same grape as Mataro, another grape which is used in parts of Spain. There are still a few old vine Mataro vineyards around Santa Clara Valley that yield really interesting wines but this is the first time that I’ve had it’s French alter ego in an old vine style and it was quite good.

There are a few other wineries that we just couldn’t get to that may be worth checking out. Martin Ranch has been open for a number of years and Ross will be opening in May. If you are part of the two million or so people that live in the Southern San Francisco Bay Area, try tasting in your own backyard for a change. You’ll be very pleasantly surprised.