Winery-Sage.com: Birth of a Web Site

What does one do when your youngest kid goes off to college leaving you and your wife as empty nesters for the first time in your marriage?  Aside from referring to yourself as “one,” likely a sure sign of impending senility, apparently you start a reference site for wine. Isn’t that what every couple with backgrounds in Math, Business, and Retail Sales does?  No?  Damn … we should have realized that sooner then.

When we got married, my new wife, Karen and I each brought “a little something extra” to the marriage. She contributed a 7-year-old boy; I contributed a 3-year-old black lab (we still debate about whose contribution was better behaved). On our first anniversary, almost to the day, our youngest son came along, so pretty much since we’ve been married, life has revolved around kids and dogs. Time quickly flew by and the 7 year old turned 25, the old dog lived to 14 and passed away and the newborn hit 17 so it was time for the obligatory College review trips. He had made it abundantly clear (roughly on a daily basis) that he wanted to be far enough away so we couldn’t drop in on him no matter how many assurances we gave that we didn’t particularly want to because we planned on having a life too.

Most of the schools that he wanted to visit were at least 3 hours south of our home in the San Jose area (California for the out of state readers). On the way down, we’d be passing through Santa Lucia Highlands, Paso Robles, San Luis Obispo, and Santa Barbara. The light bulb went off – hey those are all good wine areas. We could stop and do some tasting but we didn’t have a lot of time so I wanted to do some research to find the type of wineries that we like. Now, I love living in the 21st Century – the Internet is the repository of man’s accumulated wisdom, all available at your fingertips. It shouldn’t be that tough to find just the type of winery that we wanted to visit so I started my search.

Step One: Search for “Family Wineries” and “Santa Barbara” in Google.  Hmm, 1,080,000 results. Great, I’ll still be looking at web pages by the time our son has finished a doctorate.

Step Four: Repeatedly bang head against the wall. One aggravating hour later, I had visited innumerable sites that seem to promise meaningful wine information but were just there to sell wine related products or services; in other words miscellaneous crap. The last straw was stumbling onto one site that sold various wine items including clothing stained by wine (kind of like the volcanic dirt dyed shirts from Hawaii). Great, now I had visions of hairy Italian men rolling around in barrels of Chianti (I still have nightmares).

The morning of our trip, we quickly settled into our normal “long drive routine” – my son in the back seat intermittently sleeping, listening to his iPod or commenting that he was hungry (the last one happens a lot) and my wife beside me reading. There are several stretches of Highway 101 between the Bay Area and Santa Barbara where your mind can wander but I actually like the longer drives because it gives me time to think. Usually I think about work, but this time my mind kept going back to my fruitless search for a meaningful winery reference. I knew what I wanted but just couldn’t find it. Well…if I couldn’t find it, I’d have to make it. Sometime after I passed the 2,000th tumbleweed I had worked out a site that I would want to visit.

Something else also struck me. Do you ever have one of the “Doh” moments where you realize that an impending event is suddenly just around the corner – where reality smacks you in the forehead? I had one of those moments on the drive as well. My wife and I were actually going to be alone for the first time in our marriage, not counting the new black lab “Guinness.” Frankly, that probably would have hit most people much sooner but I never claimed to be the sharpest tool in the shed. Wow, alone for the first time? It was clearly time to take stock of the situation. That meant a lot of extra time our hands. It appeared that there were several options; stay busy or embark on a midlife crisis.

Now, before you get the wrong idea, my wife and I really do like spending time with each other but we needed something to do to fill up some of that extra time. Having decided that if this was a midlife crisis, it was at least a small “containable” one, I chose the web site as the best outlet. I’m somewhat embarrassed to say that I did this in secret for fear that my wife would think I’d lost what little of my mind still remained after raising two kids and two dogs. After about 6 weeks, I showed it to some friends who’ve always been a good sounding board (thanks Vince, Terri and Kristin – one added benefit  – they’re located on the other side of the country so if it was an abject failure, I could keep it a secret). Their feedback was very positive (actually far more than I could have hoped) so I finished flushing it out and then showed it too my wife. To this day, I’m still not sure if she found the idea intriguing, amusing or just humored me they way you’d humor one of your kids. If she remembers, she still not letting on.

A few more weeks of formalizing the content, adding some graphics to the mockup and we were ready for a name and a logo. As far as a name, we tried every variation of wine with “pedia”, “dictionary” etc. and all were taken. In retrospect, I’m glad they were. Although descriptive, they really sounded kind of mundane. Once we decided on the concept of trying to impart wisdom and knowledge, “Sage” became a working title that stuck. The statue, “The Thinker” kept coming to mind as a visual symbol for the site. The only thing that could make him better was holding a beverage – and a logo was born – “The Drinker.” 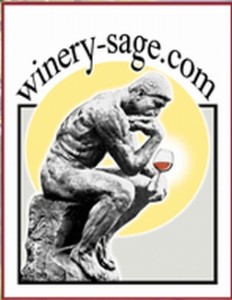 Thankfully, our friend Terri, who is a very gifted graphic artist, came to the rescue again and was able to take my rough renderings and make them look professional (thanks again Terri!).

After a few more weeks we ran it past a number of winery owners and managers and again, the feedback was positive so we engaged a web master and 12 months later, here we are.  The site went live in April of 2012 and we are still flushing out some of the last of the content. Some time about the end of the year, we should have all of the Varietal information completed and will begin to add to the expanded winery listings, the real reason the site came to be in the first place. It’s been an interesting journey so far and we’re looking forward to growing both the content and the user community.

Congratulations if you’ve actually got the end of this post. You have far more patience than I do. Thanks for visiting Winery-Sage.com and come back often because we’re always adding content.

For the continuing saga of Winery-Sage, since it went on line and its principle “instigators”, feel free to follow the story as it unfolds…