Winery-Sage.com: Evolution of a Web Site, AKA Why Changes Take Forever 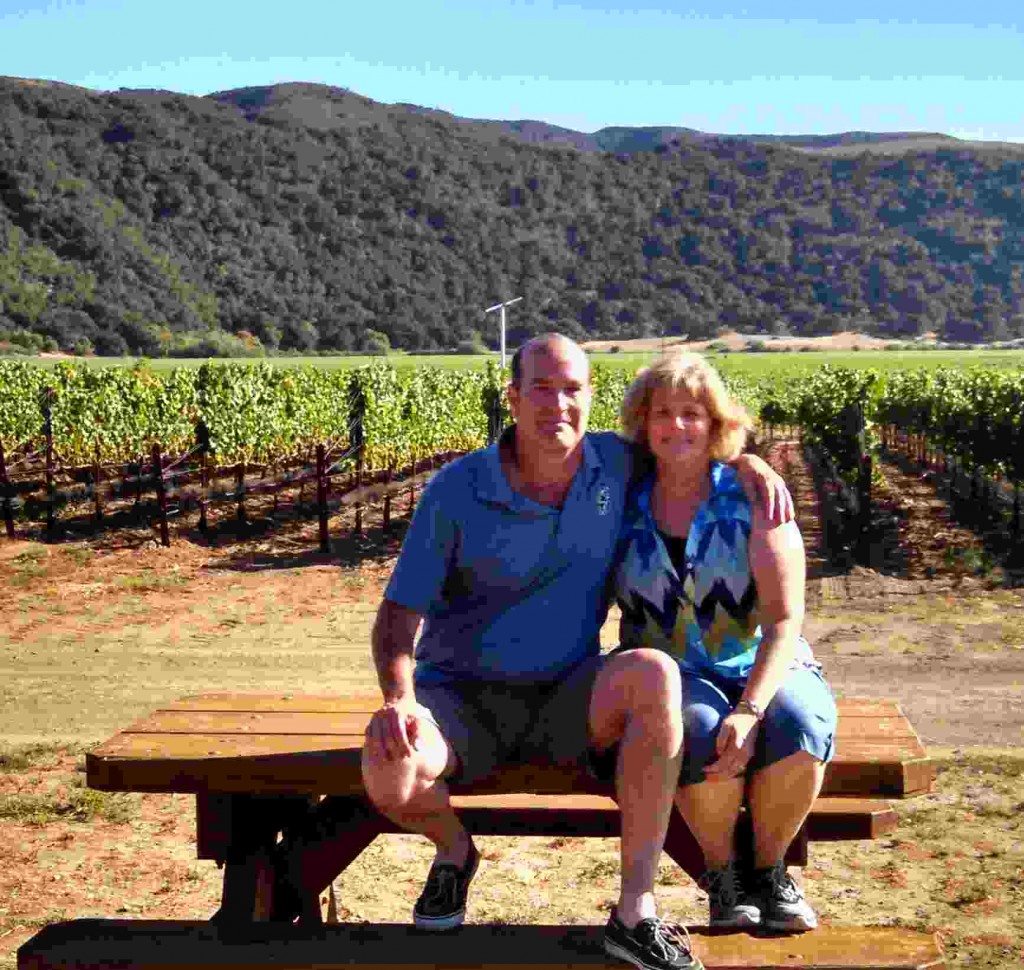 Winery-Sage Hard At Work At A Winery!

Those of you who have kids can probably sympathize with how fast life changes. One minute you’re changing dirty diapers and trying not to get squirted when the cold air hits “certain areas” and the next, he is off at college and talking about getting a PHD. Thankfully our kid got his mother’s brains. That is kind of how it’s been with Winery-Sage. We gave birth to this thing about four years ago and it continues to evolve and develop a life of its own.

So why the retrospective trip down “Amnesia Lane”, to steal a term from “The Dead Poets Society”? After writing just over 100 blog posts and re-engineering the site so it is mobile device friendly, it seemed like an opportune time to reflect back and wonder how the hell we got here. Over the course of this post, you’ll get an education on how to badly underestimate the amount of time it takes to write content for blogs, how not to dispose of dead animals on your property, stone masonry, lumberjacking techniques, how to dress as a chimney sweep for Halloween, and how long it takes to split lots of firewood….

Once we had the basic site up and going, we started to look at how to build our wine community. Our purpose was (and still is) to connect wine enthusiasts to smaller wineries who get overwhelmed by the mass marketing of the big guys and to demystify wine to those “would be wine enthusiasts” who want an un-intimidating site from which to learn. The next step was to add the blog and begin to provide additional content that our visitors might find of interest but you know the problem with adding a blog to a web site? If you don’t actually write blog posts it just sits there and does nothing – kind of like your in-laws that came for a couple of days and then won’t leave. Damn…now we needed to start writing blog posts, which shouldn’t be a surprise to you because you’re reading a blog post now which of course takes time away from actually building the community. So just about the time we get into the groove of writing and are ready to start building the wine community, rampant idiocy strikes – and no – for those of you who know us, it actually wasn’t us this time.

One of our neighbors down the hill from our cabin – let’s calling him “the mewling idiot”, decides that the best way to dispose of a dead deer carcass is to burn it in the middle of a three year drought, one of the worst in California history. Oh yeah…and let’s do it in the middle of September at the height of the dry spell and apparently not have a water hose around to take care of any problems that might occur. Can you guess the outcome? Oh come on, I bet you can. The deer quickly became an inferno and within 45 minutes, the fire went into our neighborhood and took out 31 houses. Ours was the first one on our street still standing. Guess what happens then. You get to deal with insurance companies. Isn’t that a treat? A word of advice to any one reading this…check your coverage because homeowners insurance only covers a small portion of “external structures” – things like fences, detached garages etc. This is where most of our damage occurred so we ended up doing a lot of the work ourselves to compensate for the funds we weren’t going to get.

That involved cutting, hauling or burning (during the winter by the way when burning is allowed) the remains of 29 trees and dumping the remains of 240 feet of railroad tie retaining walls. Next step – rebuild the retaining walls before the rain triggers a landslide and our property decides to imitate an RV and move into our neighbor’s yard. I’m all for a bigger yard but I don’t think that is going to count. I’ll be damned if I was going to buy anything flammable again so enter the masonry blocks and gravel. 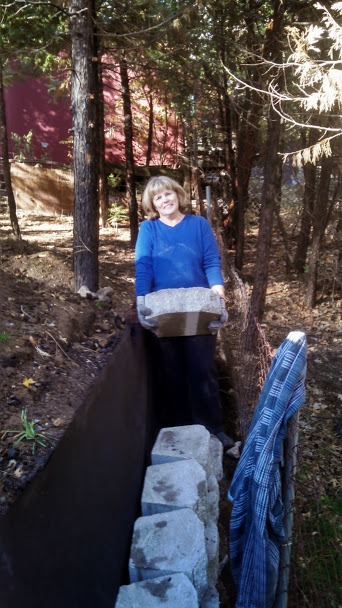 Karen Hard At Work On the Retaining Wall. Ken Took a Break with the Excuse of Taking a Picture

Over 7 weekends, Karen and I moved and installed 85,000 pounds of blocks and gravel by ourselves. Not too bad for two old farts. With the rebuild and repairs well underway, we were finally ready to start back on the site. 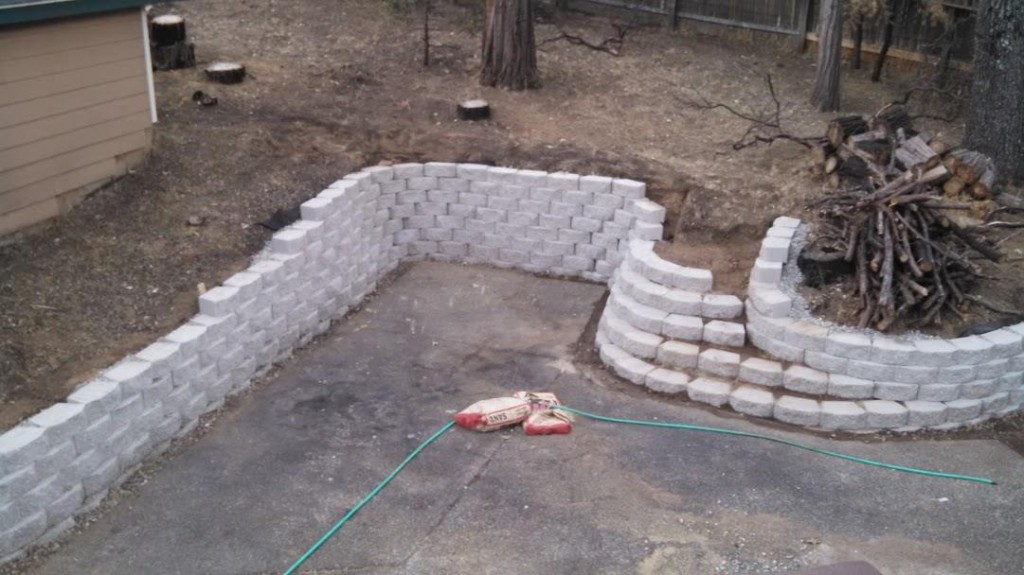 A Small Part of the Retaining Walls in Process

But wait, nature decides to throw round two at us. On December 30th barely three months after the fire, the mountains around our cabin (again with the cabin – what gives?) has 100 mile per hour winds and one of our neighbor’s trees decides that it’s time to fall and falls directly towards our house. Not a problem if it’s a 15-foot tall shrub. Big problem if it’s a 150’ tall Ponderosa pine. The only reason it didn’t take out the back of the cabin is that it caught on the one remaining pine tree on that side that didn’t burn in the fire. A couple of degrees either way and the back of the cabin would have been toast. 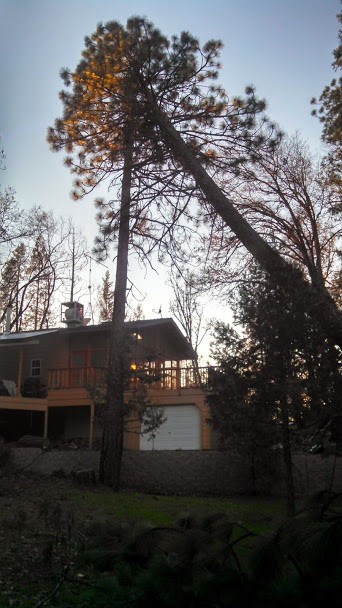 It was pretty amazing to see how they actually stabilized the big tree while they slowly chopped off the top sections using a bucket truck. We were now convinced that this place is cursed until a friend pointed out that the place has survived two catastrophes that should have leveled it…fair enough.

Along comes Fall a year later and this huge pile of logs that burned are still staring us in the face and our older son is about to get married and he and his fiance need a couple of projects made from wood from the fire.  They were at the cabin with us when it started so it’s part of their story. 50 center pieces, 10 place card holders and a three tier doughnut platter later, we finished the wedding stuff.  Now we are ready for the next project at the cabin which is all of the wood that burned and is nicely dry now so it’s good to burn – in a fireplace this time but that entails splitting it. A friend needed some wood for his place as well so the two of us rent a splitter and had at it. 6 ½ hours and 5 ½ cords of wood later we finish, thoroughly blackened from the soot that is still on many of the logs. 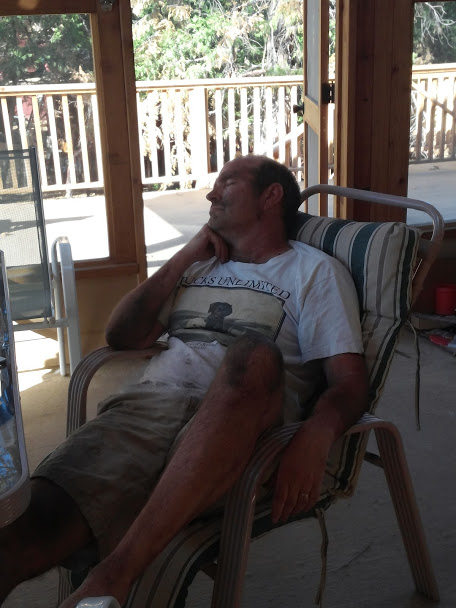 So we would almost be done with the last of the fire cleanup, needing only to cut the last few smaller logs for kindling and then stack about three cords of wood that are still on the property if we hadn’t decided to start on a remodel of the cabin in early summer. I guess some people never learn….