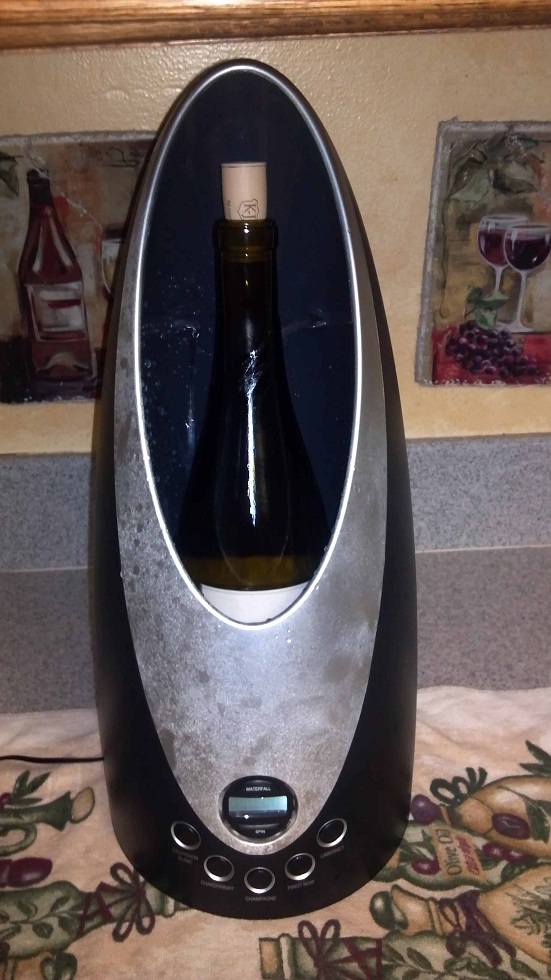 
Advertised Purpose:
Bevmo says, “Chill and serve your favorite wines and other beverages to perfection in this waterfall wine chiller. Cooling system is computer controlled and includes a built-in rotation feature.”

Expectation/What it Means:
The product claims to accelerate the cooling process for wines to quickly bring them to the correct temperature.  There are 5 different buttons, each with a preset time for various styles of wines, from light bodied white to heavy bodied Reds.

The premise is by spinning the bottle in a cold-water bath and cascading cold water over the bottle, the wine inside is quickly chilled.

END_OF_DOCUMENT_TOKEN_TO_BE_REPLACED

Winery-Sage.com: Birth of a Web Site

What does one do when your youngest kid goes off to college leaving you and your wife as empty nesters for the first time in your marriage?  Aside from referring to yourself as “one,” likely a sure sign of impending senility, apparently you start a reference site for wine. Isn’t that what every couple with backgrounds in Math, Business, and Retail Sales does?  No?  Damn … we should have realized that sooner then.

When we got married, my new wife, Karen and I each brought “a little something extra” to the marriage. She contributed a 7-year-old boy; I contributed a 3-year-old black lab (we still debate about whose contribution was better behaved). On our first anniversary, almost to the day, our youngest son came along, so pretty much since we’ve been married, life has revolved around kids and dogs. Time quickly flew by and the 7 year old turned 25, the old dog lived to 14 and passed away and the newborn hit 17 so it was time for the obligatory College review trips. He had made it abundantly clear (roughly on a daily basis) that he wanted to be far enough away so we couldn’t drop in on him no matter how many assurances we gave that we didn’t particularly want to because we planned on having a life too.

Most of the schools that he wanted to visit were at least 3 hours south of our home in the San Jose area (California for the out of state readers). On the way down, we’d be passing through Santa Lucia Highlands, Paso Robles, San Luis Obispo, and Santa Barbara. The light bulb went off – hey those are all good wine areas. We could stop and do some tasting but we didn’t have a lot of time so I wanted to do some research to find the type of wineries that we like. Now, I love living in the 21st Century – the Internet is the repository of man’s accumulated wisdom, all available at your fingertips. It shouldn’t be that tough to find just the type of winery that we wanted to visit so I started my search.