Going Wine Tasting In Bordeaux? Bruges Is A Must See Either Before or After 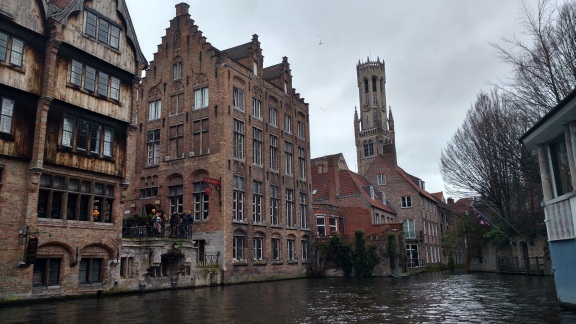 The City of Bruges, Belgium

Well…we’re now in the aforementioned Bruges… “The land of many hangovers” and this place is stunning.  More old buildings than Ghent, at least in the center section and probably the biggest collection of bars and restaurants we’ve seen in years.

We met up with our friends, Steve and Allison from the UK and our foreign exchange student from Germany of five years back, Tammo and his girlfriend Melina and our long time Belgian customers that have become good friends, Peter and Johan and their wives, Caroline and Natalie.  It sounds like the beginning of a joke.  Four Belgians, two Germans, two Brits and two Americans walk into a bar…The United Nations has nothing on us.

The weather was cool to downright cold but other than an occasional drizzle, it didn’t really rain.  We all met up (minus the Belgians who sadly had to work) in the Zots Brewery.  Nice place but food was pretty mediocre.  Steve and I took off to go see our friends at work and talk a little business with the hope that Karen, Allison and the two Germans wouldn’t get arrested without being chaperoned.  I think it’s 50/50 if they actually did and just made bail before we reconnected.  We all reconnected after a couple of hours and Peter and Johan took us out of Bruges to a quaint little country town towards the coast in an area they call the Poulders.  We had a great dinner (after somewhere between 5 and 20 drinks apiece…Peter just kept bringing them out).  Belgium has roughly 11 million people and I’m convinced that Peter knows at least 10 million of them.  We must have been 15 miles from Peter and Caroline’s place but it seems like he knew everyone that came in.  After, dinner, it was off to the Kroon, their favorite local pub.  We finally left about 1:00AM.  Apparently Peter and Caroline didn’t get out until about 2:30 AM.

The next day we walked around the town while trying to wake up, thankful that we weren’t hung over (except for Allison who was feeling distinctly off her game).  Off to Peter and Caroline’s house for lunch.  They managed to pull together a stunning meal despite having less than 4 minutes of sleep (or so I guess).   Several good bottles of wine later and we waddled out of their house barely able to fit through the door to get back to old town Bruges to take a boat tour of its canals.  It’s a good thing that the boat operators don’t charge for excess baggage if you’ve eaten too much.  Bruges was originally a port and has a number of canals, many of which run through downtown with buildings built right up to them similar to Venice.  We’ve heard that it’s often called “the Venice of the North”. 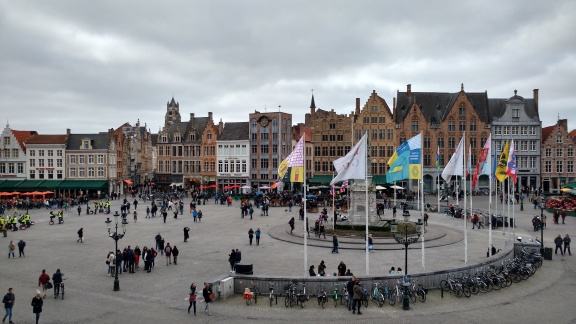 The rest of Saturday and Sunday were spent walking around Bruges, enjoying various sites and or establishments.  Karen at last got her Belgian waffles, something that she’d been waiting a few days for.  She was really disappointed that she couldn’t get them at breakfast.  The Belgian waiter looked at us like we were nuts when she wanted them before lunch because apparently they are a dessert in Belgium.  He thought it was so funny that he had to go back and tell his other coworkers about the crazy Americans that eat waffles and pancakes for breakfast…such idiots, those Americans.

Sunday night was another great meal, this time with Johan and his wife Natalie.  Before dinner, they took us out to the edge of town to see the windmills in the area where they got married.  They call one of them “their” windmill because of that, but they graciously allowed us to borrow it for a couple of pictures.  After dinner Natalie, who was finally over a bad cold, was ready to party and wanted another drink so we had a last one at the hotel while our last three liver cells desperately tried to hide from yet one more infusion.

The next day, we jumped on a couple of trains from Bruges to Brussels to Paris to visit with our long time family friends, the Selosse’s.  No problems leaving Belgium but unfortunately, as I’m sure everyone has heard, there was a tragic terrorist attack less than a day later in Brussels.   We were safe in Paris with friends at that time but it was really sad seeing the carnage.  We had originally considered spending a couple of days in Brussels but our friends in Europe convinced us that it wasn’t a good idea.  Clearly they were right.