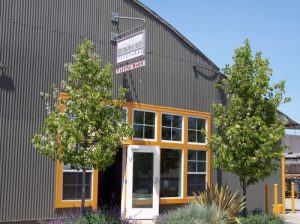 Wine tasting in the Santa Cruz Mountains is a special experience. For those of us who grew up in these mountains, getting there is part of the fun after driving in the burgeoning, weekday traffic of Silicon Valley. An exhilarating cruise through the forested canyons, only to emerge into suddenly manicured vineyards is something that can be experienced in very few wine regions. However, many flat-landers shake in abject terror at the thought of navigating meandering mountain roads where meeting an oncoming car on a road that is supposedly wide enough for two but is really a single track, mule trail is a daunting experience. It gets even better for those who suffer from carsickness. Highway 9, Bear Creek Road, San Jose Soquel Road and a myriad of other scenic drives, offer a surefire weight loss method by quickly and efficiently evacuating the contents of the previous meal. That’s probably why several enterprising wineries started putting their tasting rooms in more urban settings.

Urban Wine Trails are one of the fastest growing trends in wine tourism. By locating a few to as many as 15 or 20 wineries within a short walkable distance, the wineries not only remove the threat of plunging your car into a bottomless abyss, they make it extremely convenient to visit two, three, hell even six or seven wineries while safely walking from tasting room to tasting room.  If you sample at more than one or two, please have a Designated Driver or take a Lyft, Uber or taxi.

The weather this winter had put Karen and me in a bit of a funk. Don’t get me wrong, the rain is great and California desperately needs it, but holy crap, enough is enough already. We were also trying to get over “colds from hell” that we just couldn’t shake. One Sunday in mid-March we had a rare day where not only the weather was great but we were both beginning to feel well enough that another weekend of sitting inside, staring at the 130th rerun of the Shawshank Redemption or whatever retread was showing on TV sounded horrible. Karen suggested heading to Silver Mountain Winery to pick up our wine shipment but that meant heading over to their Santa Cruz tasting room because the winery tasting room, perched high atop a peak in the Santa Cruz Mountains, is closed on Sundays. The weather was great and we hadn’t had a chance to put the top down on the car for what seemed like a millennium so off we went.

The Santa Cruz Tasting room for Silver Mountain Winery is located on Ingalls Street in Northern Santa Cruz. Ingalls Street, Swift Street which crosses it, and several nearby streets play host to Surf City Vintners, a collection of a dozen or so Santa Cruz Mountain Wineries that have decided to locate their tasting rooms in the midst of Urban Santa Cruz. We’ve blogged about Silver Mountain Winery before as part of our Santa Cruz Mountain Summit Wine Trail Blog but we’ve come to know the wines so much better in the last three or four years, so it was worth another entry. Silver Mountain makes old world style wines, lighter, slightly lower alcohol and generally more subtle than typical new world wines. Karen and I really like both styles of wine but finding subtle California wines can be difficult so that’s why this is a special place for us. Gerald, the winemaker and owner of Silver Mountain specializes in the two most famous Burgundian Varietals, Chardonnay and Pinot Noir. There are two Chardonnays and four different Pinot Noirs to choose from. Karen likes both white and red wines but when spring comes, and the weather gets warmer and the meals get a little lighter, she usually wants Chardonnay. I like Chardonnay as well but I tend to be pickier than she is, but all is well in the Winery-Sage household because the Silver Mountain Tondre Chardonnay is our favorite. I always hesitate really “shouting from the rooftops” about one of our favorite wines because I am fearful that the word will get out, wine lovers of all types will swoop in and buy out the stock leaving little to none for the longtime fans. However, I suspect that we are probably safe because this wine blog has a loyal following that may only be approaching double digits so my fears are likely just rampant paranoia of a slightly off kilter mind. Karen would probably argue more than “slightly” off kilter. In my opinion however, the real stars of the show are the Pinot Noirs. My favorite is also from the Tondre grape field (Tondre calls itself a grape field by the way, not a vineyard because the owners consider themselves farmers first). Karen really likes it as well but her favorite is actually a vintner’s blend called Spencer’s Choice, named after one of the coolest winery dogs on the planet, Spencer (please tell me you were able to guess the dog’s name after my none too subtle hint). 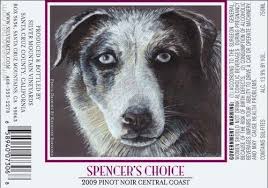 Even better, he was running a sale for $189 per case for really nice Pinot Noir which is almost unheard of these days.  By the way, the “he” meant Gerald, not Spencer.  Gerald doesn’t allow Spencer to set wine prices…to bad…I’ll bet I could get a really good case of Pinot for a serious belly rub. 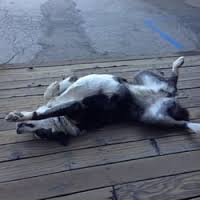 Needless to say we bought a case. Silver Mountain Winery also makes two Bordeaux style red blends, Alloy and Oscar’s Wild Red (named after a previous winery dog of course) as well as a really good Cabernet Sauvignon and one of the best cool weather Syrahs available. One other point…while other winemakers are already rushing out their 2014 and 2015 vintages that are probably so young if they were human, they wouldn’t even be potty-trained, Gerald’s current red wine offerings are mainly nicely matured 2009s and 2010s.

If you are in the Bay Area and are looking for a great venue to taste some really unique and well-crafted wines, bravely go where few have gone before and venture up into the mountains to the Silver Mountain Tasting room (open only on Saturdays) or down to the Surf City Vintners Tasting Room on Ingalls Street (open Friday, Saturday and Sunday). If you are disappointed, you’re clearly a troglodyte and you should stick with Boon’s Farm or whatever current paint thinner/grog strikes your fancy.