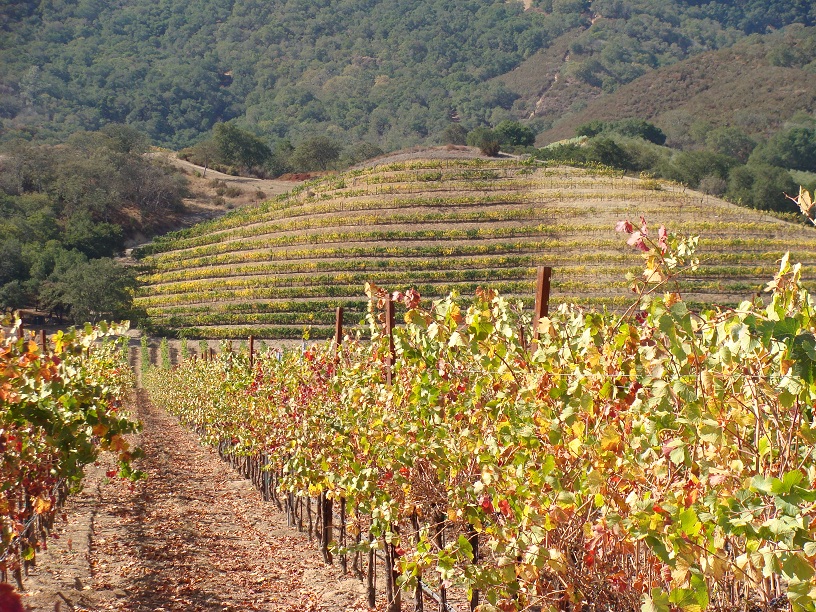 The View at Pietra Santa

Explorers:
Karen – Ken
Check out their tastes and bios here.

General Location:
Hollister, located about an hour south of San Jose, is one of the two incorporated cities in San Benito County (the other is San Juan Bautista).  South of Hollister lies the Cienega Valley.  The valley itself is quite narrow and is part of the San Andreas Fault system.  Both Karen and I are native Californian’s so the idea of an earthquake wasn’t particularly worrisome.  Given the Wineries’ proximity to the fault though, I’d wager that any earthquake would create some compelling YouTube videos of non-natives out for a tasting.

Details:
San Benito County wineries are a study in contrast.  On one hand, Calera and De Rose were established decades ago by winemakers with clear visions of producing Old World style wines in California.  On the other hand, Leal and Pietra Santa embody the spirit of a new generation of wineries, producing California style wines, more fruit forward, and often bigger than their old world ancestors.

Tasting in mid October is perfect for visiting wineries to see them in mid-crush.  This trip was no exception and amid the smell of fermenting fruit and accompaniment deliriously happy fruit flies, we tasted and watched craftsman at work.

Our trip started at Calera Winery, founded by one of California’s rare visionary winemakers, Josh Jensen.  I was really looking forward to visiting Calera because if any one can truly lay claim to being the father of California Pinot Noir and Viognier, it’s Jensen.  If you’re curious about the trials and tribulations of trying to introduce a Varietal to a new region, especially one as finicky about conditions as Pinot Noir, read The Heartbreak Grape.  It chronicles Jensen’s early efforts and search for the perfect location.  Josh is also the mentor of Anna Dos Remedios of Idle Hour Winery in Madera County, who has become a good friend of ours.  Calera produces mainly the Burgundian wines, Pinot Noir and Chardonnay but also is known for its Viognier.  Tasting at Calera takes place in the front of the Barrel room.  Starting in the morning can be a chilly experience so bring a sweater (as well as gloves, hats, thermal underwear, snow boots and anything else you might find in an Arctic survival kit).  The temperature however was perfect for Chardonnay and Viognier.  Karen preferred the 2011 Central Coast Chardonnay while I liked the one from the slopes of Mt Harlan where the vineyard is over 2,000 ft above sea level.  Although neither of us are big fans of Viognier, we both enjoyed Calera’s.  It was well balanced and had just a hint of the floral aroma that can often overpower Viognier.  We then moved on to a number of Pinot’s, most of which are vineyard specific and came from the Mt Harlan AVA.  There are no new world, fruit forward Pinots here.  All are produced in the old world style.  While we enjoyed them, we weren’t knocked out until the conversation turned to the temperature and we realized that they likely were at least 5°F too cold, which accounted for a thinner, one note flavor.  Once we warmed them slightly, they really opened up and hinted at what they would become in several years.  Calera wines are made to age gracefully.  Of the Pinot’s, Karen and I both liked the 2009 de Villier’s the best.

On to De Rose with our ever-present legion of fruit flies where Pat De Rose and his family have been producing wines since the 1980’s.  In addition to their Estate and other local wines, they partner with wineries in Europe and South America to produce wines there for import into the US.  Both Karen’s and my favorite was the Dry Farmed Zinfandel produced from 109-year-old vines.  It had hints of leather as well as the spice normally associated with Old Vine Zin.  The fruit flies didn’t venture an opinion of their favorite.  According to our host, De Rose dry farms all of their vines.  They were in mid crush of Zin and both the sorting and de-stemming was taking place in the Barrel and Tasting room.  Pat De Rose and his mustache (truly the 8th wonder of the world – check out a picture on their web site and you’ll see what I mean) was driving the forklift to deposit containers of grapes high up into the sorting.  Thankfully Pat appears to have lots of practice because having a ½ ton of grapes hovering 10 feet in the air and only a few feet behind you will quickly test your nerves (and how much you’ve had to drink).  If you visit De Rose, check their web site and try and make it a weekend when their antique car museum is open.  It is one of the great collections on the West Coast. 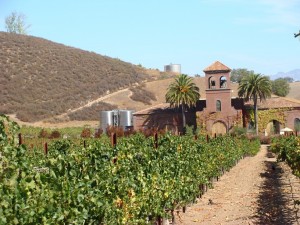 Peitra Santa is a newer winery located less than a mile behind De Rose.  It’s a beautiful building surrounded by vineyards.  In the back, the vineyards are planted on the steep slopes of the hills creating a stunning backdrop.  The staff was friendly and helpful and it’s a great place to picnic.

There are two other wineries listed on the Cienega Valley signs, Enz and Summerayne.  We were told they are not active so don’t waste your time driving the extra 4 ½ miles to get to them. 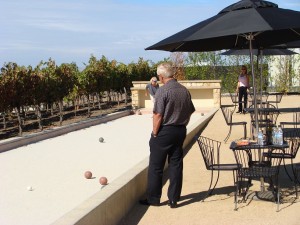 Leaving our intrepid band of Fruit Fly followers behind, we moved on to Leal, which is as modern as Calera is traditional.  It’s located about 15 minutes North East of the other three and East of downtown Hollister.  The tasting room is chic and the recently installed wine dispenser is very high tech (although I’m not sure if it really contributes to the wine tasting experience).  The grounds are beautiful and above the winery, there are Bocci Ball courts and spacious picnic grounds partially shaded by Olive trees.  Both Karen and I liked the Carneval best, a Meritage blend of Cabernet Sauvignon, Cabernet Franc, Merlot and Malbec.  I also enjoyed the Cabernet Franc which had a hint of pepper.  Karen also liked it and considering she really hasn’t enjoyed Cab Francs lately that was a surprise.  I didn’t tell her what it was so I cheated which I’m sure that will also come back to haunt me now that I’ve made it public.  Leal is also handicapped friendly – the tasting room has a lower tasting bar that can flip down from the main bar making it a convenient place for those who can’t stand at the taller bars favored by most other wineries. 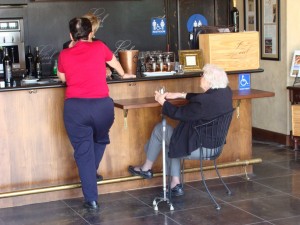 This is definitely a trip worth taking.  It’s only an hour drive from the South Bay.  The four San Benito County Wineries offer four different takes on wine and each has its strengths.  If you are going to picnic, Pietra Santa and Leal have the most extensive grounds although all of them have facilities.