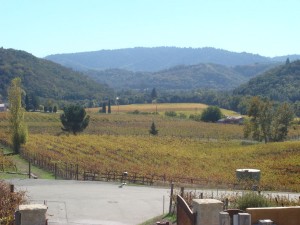 4) More information can be found for each Varietal that we’ve listed by clicking on the link that we’ve created the first time the Varietal is listed in each post.

General Location
Santa Clara Valley is located at the south end of the San Francisco Bay. Its main city is San Jose. The five wineries where we tasted are located within 15 minutes of each other, roughly 25 minutes southwest of downtown San Jose. For those who get motion sickness and can’t handle a wine tasting trip in the Santa Cruz Mountains, this is for you. Generally, the roads are so flat and straight that the only turn you’re likely to make is correcting for an alignment problem on your car.

Details
Quick…what do you think of when you think of the Santa Clara Valley? If you said “wine”, you either work in the industry or you cheated and read ahead. If you’re like most people though, you think “Silicon Valley” – home of Google, Apple, eBay, Cisco…yada…yada…yada. However, if you grew up here like I did (somewhere between the Paleolithic and Neolithic ages), you remember orchards between the towns instead of urban sprawl (albeit small orchards by the time the 70’s rolled around). The Santa Clara Valley has a rich agricultural history and wine making is a significant part of it. Santa Clara Valley wines date back more than 200 years to when the Spanish founded the missions and immediately started making wine with the eponymous “Mission Grape”. European immigrants brought their own winemaking traditions with them and by the mid 1800’s, wine was an agricultural staple in the valley. Like most areas in the country, Prohibition all but killed the Santa Clara Valley Wineries but a few stalwarts managed to survive as well as those that made “sacramental wine” – anything to help the church. Today, a new generation of winemakers has joined the survivors and there are now more than 20 Santa Clara Valley Wineries and even more vineyards.

Our trip started with Lightheart Cellars, a new winery located in the town of San Martin. Like many start up facilities, winery and home merge as one so the wine tasting is on the back patio. Winemaker Jane Mika-Haynie is friendly and informative. We started with a 2011 Carneros Chardonnay which Karen and I both liked. It was light, well balanced with a hint of oak and quite low in alcohol (roughly 11.5%), which was a refreshing change from many of the “smack you upside the head” higher alcohol wines that are mass-produced. They’re also one of the few California wineries that make a Colombard (yes…. they actually make a Colombard from vines they “inherited” several years ago). It will be interesting to watch it progress as they learn the vineyard and the grape to see if they can make something that will make everyone forget those horrible 1970’s French Colombard jug wines. The 2010 Carneros Pinot Noir was particularly good (double gold medal winner at the 2012 CA State Fair). The last of the set tasting was Mead. Ok wait a minute – I know what you are thinking (frankly I was thinking it too – way too sweet for a wine tasting trip). I am generally under the impression that Mead is fine warmed with a lot of spices to cover its cloying sweetness and is usually for the holidays but not for anything else. This however was lighter than most. The winemakers described it as a cross between a hard cider and mead, which I found to be pretty accurate. I liked it. Karen remained unconvinced after a very small sip and graciously offered hers to me (i.e. couldn’t’ get it out of her hand quickly enough). After the set tasting, several barrel samples hinted at what is to come. A Zinfandel–Merlot blend was good but we all agreed it was still too young. The Merlot – Cabernet Franc blend however was quite good and should continue to improve before release. I thought about trying to liberate some but I figured trying to cram a 60-gallon wine barrel in my pocket might have been a little obvious. For you Vegans, take heart. Lightheart is a Vegan winery so no eggs or gelatins are used in fining the wines. Also, check out the hand stenciled grapes on the patio. They’re a great accent but whoever did them has waaaaay more patience than I do. Before you come here though, make sure they will be available for tasting. They are open select weekends but will be expanding their hours next year. 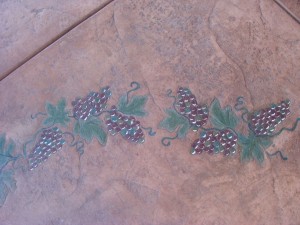 On to Clos LaChance, one of the bigger Santa Clara Valley wineries. The estate is beautiful. If you are looking for a place to hold a wedding or corporate event in the Valley, this is one of the few that can accommodate it. There were a large number of wines available and while most where pleasant, neither Karen nor I found any standouts. There are enough wines on the menu however that virtually anyone should be able to find one that they like. Check out the 2010 Central Coast Zinfandel. Wine Spectator gave it 88 points on it list of wines for $20 or less.

Farther South, Sycamore Creek Vineyards specializes in Bordeaux style wines and whatever they are doing; they should keep on doing it. Most of their wines are estate grown and thankfully, the winemaker appears to have let the grapes do the talking rather than imposing his will on them. I had been here once before but Karen and our son were at College orientation. Some one had to work of course, so I made the supreme sacrifice and tasted without her…ah, the burdens we must bear. Karen has a soft spot for good Cabs and Merlots and here, she was going to be a kid in a candy store. The only white wine was a ’08 Chardonnay.  I guess even Bordeaux specialists need a white and thankfully he didn’t choose to make a Sauvignon Blanc (read our “Sauvignon Blanc Rant” if you want to know why I say “thankfully”). After working our way through an Estate Cabernet Sauvignon, Merlot and a Bordeaux style blend called Mosaico, we tried the flagship reserve Cab Sauv, Karen finished with a Port (I stay away from them unless it’s the last winery – I think the damn things ruin your palate for anything else the rest of the day). My favorite was the Reserve Cab but Karen really liked the Mosaico.. So which one did we buy? You guessed it – the Mosaico. 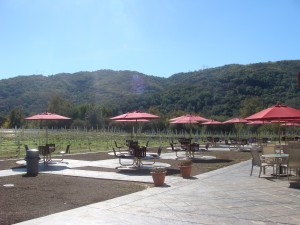 Wine Tasting on the Patio at Sycamore Creek

Traveling from Bordeaux to the Rhone (figuratively speaking of course) we hit the Aver Family Vineyards next (again figuratively speaking – we didn’t actually “hit” them). If you want to experience the Châteauneuf-du-Pape region of France without leaving California, try John Aver’s wines. He has a deft hand with all of them. Aver is converting the estate from Cabernet to Rhone Varietals, no doubt causing much wailing and gnashing of teeth by the “Cab Sav is everything” crowd. You know you’re in for a “big red” experience when the tasting starts with Syrah. Generally, both Karen and I prefer Burgundy and Bordeaux wines to those from the Rhone but I could learn to make an exception with Aver’s. Our favorite was the blend called “Hope” in which John has attempted to recreate the flavors of a Châteauneuf-du-Pape. We’re not experts in those types of wines but if this one is typical, we’ll have to do some more serious tasting…ahhhh…I mean research. The Family Album Red blend was good and a little lighter than I would have expected given almost 3/4s of it is Petite Sirah. 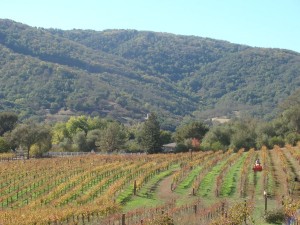 Just down the road is Jason Stephens Winery and while the previous two stay true to a specific region, Jason Stephens is an equal opportunity producer (meaning they make wines from various regions), which perfectly suits our philosophy of equal opportunity drinking. Tasting took place in their still unfinished tasting room with the pervasive smell of fermentation and equally pervasive buzz of fruit flies (usually unavoidable this time of year). I say “still unfinished” because they have been waiting for the final paperwork for over a year. Don’t you just love government bureaucracy? Most of the wines that we tried were a little lighter than the typical California style, which was nice for a change. First up was a 2010 Mourvedre. We both liked it even though neither of us are huge Mourvedre fans, probably because it was lighter so no flavor was particularly overwhelming. The Zinfandel leaned to the earthier side, which is fine with me because I’m really tired of the jammy zins that seem to be the direction many producers are heading. If I want that much jam, I’ll buy a jar of Smucker’s. The Merlot was subtle and lighter as well. Karen particularly liked it calling it “yummy”. When she starts using words like “yummy”, I know we’re done. 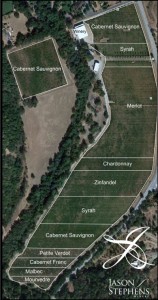 If you live in the South Bay, try tasting in your own back yard and I wager that you’ll be surprised at the quality. Our next tour of Santa Clara Wineries will likely be in about a month when we hit the wineries south of these ones but still west of 101. When we post that one, we’ll put links between the two blog entries.