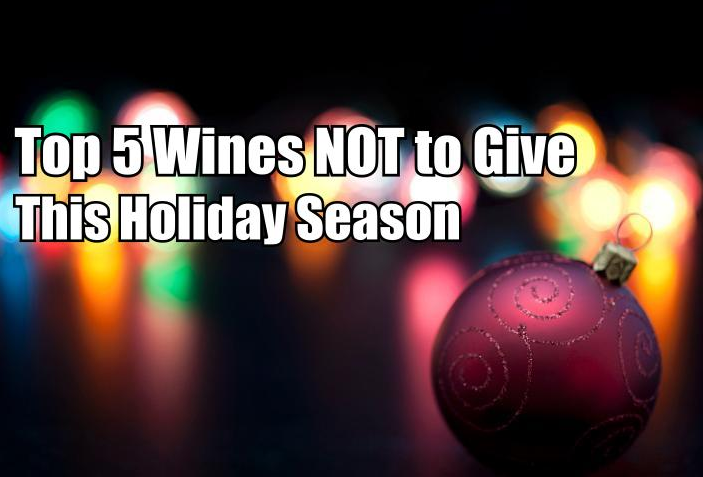 Every wine lover can appreciate a nice bottle of vino as a gift for the holidays. In lieu of actual wine, a nice wine accessory can even work in a pinch. Gifting a unique wine rack, wine charms, a fine new decanter, a new wine cellar in the basement (if you’re lucky …) can put a smile on any wine spectator’s face. It’s not too hard to get someone a great wine gift!

However, there are SOME wines you don’t want to surprise someone with during the holidays, or really, any time during the year. To help you avoid giving out a poor wine gift this season, Winery-Sage has produced a list of the top five wines which should never be gifted. Hoping to provide a little humor during your holiday shopping, you can use this to guide your gift buying and avoid shocking your hosts at a holiday party. You’ll thank us later! Read on for the suggestions.

Yep, that is actually the name of the wine. Need we say more? The “colorful” name has been adopted from how Australians describe a New Zealand Sauvignon Blanc, and it’s not too hard to taste why. While our views on Sauvignon Blanc have been well established at Winery-Sage, we’d be hard pressed to believe that even if you had a host who enjoyed this white wine that they still wouldn’t be a little taken aback by the name on the bottle. And what if they had another cat in the home? Would it get upset that you brought this bottle to mark their territory?

Imagine this scenario. You attend a holiday party where both male and female friends are in attendance. You had just swung by the wine shop to pick out a bottle of wine as a gift. You grabbed a “Skinny Girl” wine without thinking of the repercussions and thrust it at the host when they open the door for you. Their reaction to the gift could go a few different ways. One (if you’re lucky), they’ll be so happy that you think they’re a skinny girl (except “girls” typically aren’t of legal drinking age, so there’s problem number one), or two (and more likely), they’ll be offended that you’re making any kind of judgment call on their physical appearance. It could also be a guy opening the door. Now wouldn’t that be a little awkward.  No matter what, can you honestly think of any scenario where this is going to end well? Neither can we.

For those of us who grew up in the 70’s and 80’s, there were lots of commercials for Boon’s Farm Strawberry wine. Apparently not content to only inflict one type of abominable fruit wine on us, they now have 28 flavors. However, each flavor is made from apple – figure that one out. So great, 28 flavors, just enough to give some one a really nasty hangover every day in February without ever having to repeat.

True story about the original Boon’s Farm Strawberry Wine. Sometime in the early 80’s a bunch of us were sitting in a large Jacuzzi at a Condominium complex where one of us lived. There were two bottles of Boon’s Farm being passed around (needless to say we weren’t exactly 21 so didn’t have our pick of premium grog). When the bottle came around to me, I took my swig, pulled the bottle away and somehow managed to splash the nasty stuff directly into my right eye. Ouch! This stuff burns … Really burns, as in it feels like your eyeball is melting out of your face kind of burn. The only way to wash it out was to jump into the pool next to the Jacuzzi. Being obsessed with the burning in my eye, I forgot that it was mid winter and the pool hadn’t been heated in about 4 months so I plunged in, right through the thin layer of ice. Several minutes of vigorous rinsing and a mild case of hypothermia later, I finally got rid of the wretched stuff but my vision was blurry for the next couple of days. Since then, I really haven’t had much positive to say about the stuff. 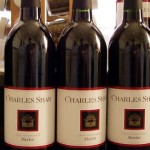 Quick disclaimer here – 2 Buck Chuck is actually called Charles Shaw and, believe it or not, several of the wines have won very prestigious awards. They’re not one of our favorites, but some of them are actually pretty good. The reason it lands on the “Don’t Gift” list is more because of the message it would send as a gift – “I didn’t really want to get you anything but I kind of figured I had to, so this was the least amount of money I could spend.” Not the best way to kick off a holiday party, is it? 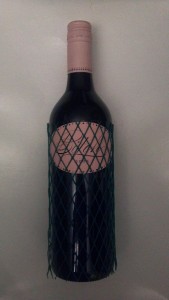 It comes with a cheesy pink label, a cheesy pink screw top and equally cheesy, green plastic “fishnet” stocking. It’s really hard to find a way to cram more bad taste ideas in such a small package, yet here we are. The bottle in the picture is actually from our collection, although we keep it away from the other wines so its proximity doesn’t infect them (the wine equivalent of Solitary Confinement). This was given to me by a friend who lost a bet that we had on Super Bowl 41 (the Colts beat the Bears). Thankfully I’ve never been desperate enough to open it. I genuinely believe that if I do, we’ll need an immediate visit from the haz-mat crew.

Some additional advice regarding Bitch wine. If you really feel compelled to spend your hard earned dollars on this product, we suggest your don’t give it to your:

Best of luck in your holiday shopping. If you’ve been given an unpleasant wine or wine related gift for the holidays ever, tell us about it in the comments. Otherwise, the Winery-Sage crew wishes you Happy Holidays!