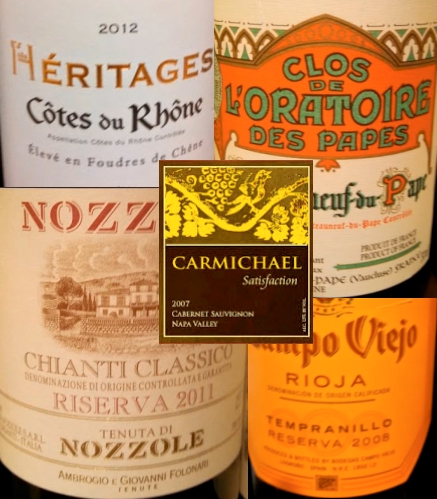 Wine Labels from France, Spain, Italy and the U.S.

Why do U.S. wine labels show the wine grape type on the label, but European wines frequently show the region on the wine bottle label? Have you had any good Bordeaux wines from the U.S.? I seriously doubt it. How about a Burgundy from California? Probably not…no way. Why not? There’s a couple of reasons but to avoid pissing off the lawyers, let’s get the legal one out of the way first.

The U.S. doesn’t produce Bordeaux wines because Bordeaux is a region in France and last time I checked, France wasn’t located in the U.S. The French have a trademark on the term Bordeaux (as well as Burgundy and Champagne which are also French wine regions). Other European wine regions like Chianti and Port are similarly trademarked therefore Americans tend to use other descriptive terms for similar wines, usually based on the wine grape type. Depending on the treaties between the U.S. and the European Union, some American wine makers can use the trademarked terms because those wineries used them before the treaties were signed.

However, even before the lawyers got involved, there were practical reasons why European wine bottle labels emphasized the region, not the Varietal. Europe favors blends of wine types and the biggest reason lies in the harsh growing conditions. The Burgundy wine region is actually farther north than Montreal, Canada. Great for Hockey….not ideal for wine The Northern latitude means a shorter growing season than in the western U.S. Rains can set in much earlier causing the wine grapes to rot or mildew before they ever leave the vine causing vineyard managers to pick fruit before it’s fully ripe. Most types of wine grapes ripen at different times. In Bordeaux, Cabernet Sauvignon ripens quite late while Merlot ripens much earlier. If you want a horrible wine, make one out of under ripened Cab Sav with without adding anything else. By blending different grape types, the winemaker can still make balanced wines even from unbalanced fruit. It’s a bit like a chef creating a perfectly balanced meal from individual ingredients that are rather monotonous in flavor – the whole is greater than the sum of its parts. 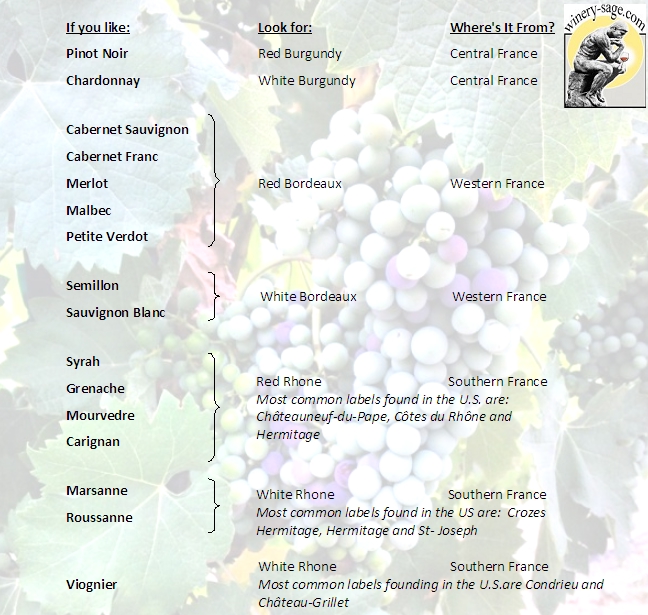 You won’t find two well known wines on the list however because not only are they a trademarked name, but they have additional steps to change them from the normal still wines. Champagne of course goes through a secondary fermentation process (at least the good stuff does) so there isn’t a U.S. Varietal equivalent of Champagne. Port is from the Douro Valley in Portugal and is a blend of up to 30 or so different types of wine grapes and then has distilled alcohol added to it to make it a fortified wine.

So there you have it – the abridged version of why European wine bottle labels are different than U.S. wine bottle labels. Despite the differences though, it’s still possible to draw broad parallels between the two. In the two infographs above, we’ve highlighted the most common European wine types – usually named after a region to the closest thing the U.S. makes.