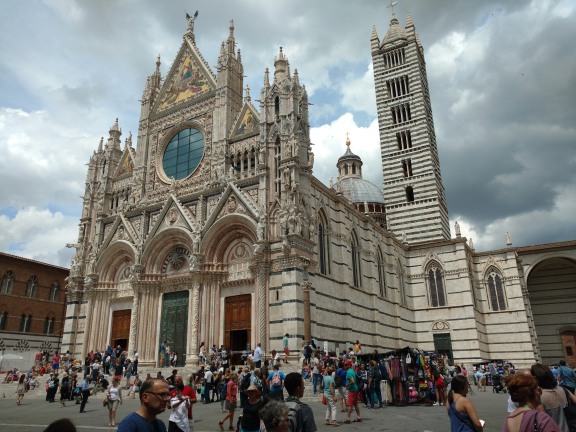 The Cathedral in Siena

The next day we took a train to Sienna to see the sights. We were a bit disappointed because we learned with both Siena and Florence that the cities are OK, they have a number of pretty spectacular churches but the real things to see are the items in the museums and they take far longer than we had. Sienna’s cathedral is very cool from the outside. It was the first time we saw what turned out to be a recurring theme in Tuscan and Umbrian churches, alternating black and white marble rows that make for a stunning effect. Inside they were surprisingly plain. 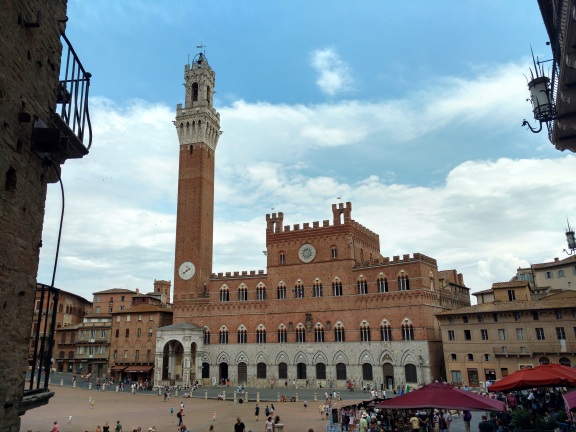 The Piazza in Siena

After San Gimignano, Sienna was kind of a letdown though, because we didn’t allow time to see the artifacts in the museums. We decided to take an earlier train back after buying wine, salumi, cheese and tomatoes and enjoyed an early evening repast on our balcony. Danny had the adjoining room so we just grabbed an extra chair and made an evening out of the simple food and watching the sun set on the town. Just the three of us sitting with some simple food and a bottle of wine was one of the best nights of the trip. 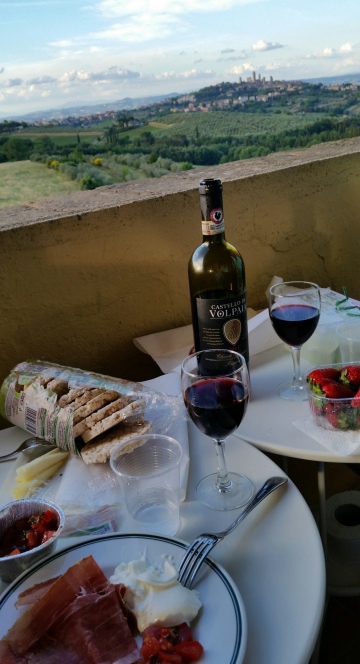 Dinner on the Balcony in San Gimignano

Arrghh…three week vacations come with their share of headaches and laundry is one of them. Invariably, we ended up following people in tour lines who clearly felt that personal hygiene was a choice that they didn’t want to exercise. Rather than starting to recycle sweaty, stinky clothes and smelling like them, we took a couple of hours to do laundry to last us through the rest of the trip. There was a young couple also doing laundry with one of the most jovial two years olds I’ve ever seen. Danny and she had a good time entertaining each other, which in turn entertained us. Afterwards, we had a great lunch. We all loved our food but Danny won with a braised meat that was delicious although Karen’s spaghetti cooked in Chianti (not the sauce, the noodles) was really good too. It’s a little odd seeing bright purple noodles but based on the taste, I am definitely going to have to try that soon. One of the café/bars that we ran into the first night served a really nice house wine that was made just a few kilometers away so we went wine tasting to see how it’s done in Italy. We had a great time and if anyone is in the neighborhood, we’d strongly suggest visiting Fattoria San Donato. We are also writing a blog post just about that tasting, so if you are interested, check it out. We’ll post it a few days after this post. 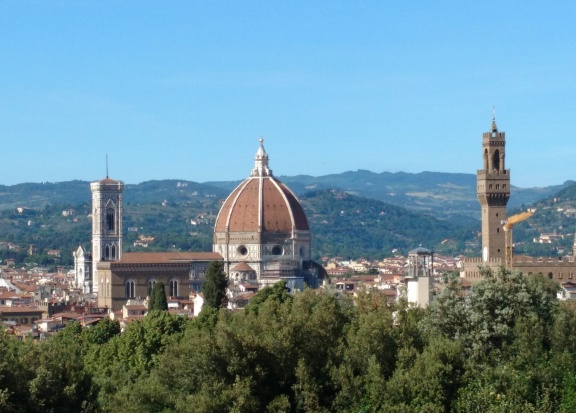 The Duomo in Florence from Boboli Gardens

The next day was Florence and we enjoyed it more than Siena because the city itself afforded more to do. We still missed a bunch and we’ll have to go back and spend more time but we did take a walk up to Boboli Gardens for a view of the city. We were also told that there is a café up at the top where you can enjoy the sites with a cold, refreshing adult beverage in hand by an American that was in the line with us to see the Duomo. No problem he said…you can’t miss it. Never trust an American tourist! We looked all over and saw nary a glimpse of anything that served drinks with a view. If one was there, it possessed military grade camouflage. 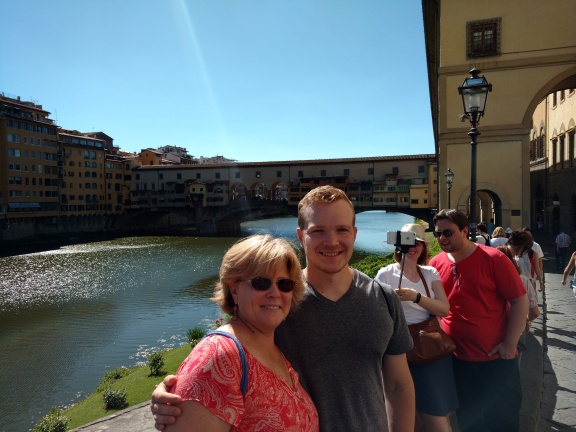 Danny left the next morning to go hang out with cooler people than us in Berlin and Bruges (actually based on what we saw from his Whatsapp pictures, he actually did hang out with cooler people than us). I can kind of remember when we were the cool people. Of course those could just be slightly embellished memories of a quickly failing memory. It was tough to see him go because the three of us spent most of our time during the trip laughing. After taking him to the train station at an ungodly early hour, we spent the morning planning our last four days in Rome. Other than having a hotel room and wanting to see the obvious sites, we’d kind of punted on what we were going to do to fill four and a half days and it was coming up in just a couple of days. Nothing like leaving things to the last minute!

The rest of the day was spent in San Gimignano checking out the other tourist things that we hadn’t done yet. Karen went up to the top of the tallest tower in town. Ken started out but then saw the state of the staircase – somewhere between rusty fire escape and a tightrope – so he bailed. It really sucks to have an irrational fear of heights. Karen decided to go for it and got some great pictures.