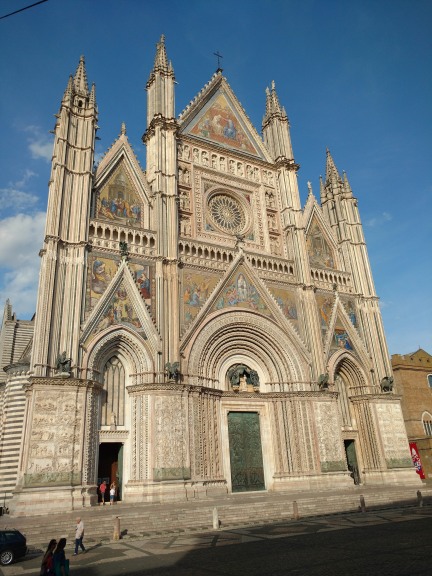 The next morning we drove to Orvieto, a small hill town in Umbria that had been recommended by a number of people. It sits up on a volcanic hill that has been inhabited for at least three thousand years. It retains all of its medieval character due to an unusual agreement between the German and English armies in World War II. The Germans proposed declaring it a “free city” meaning every one leaves without fighting. Each army moved 20 kilometers away and commenced the battle, leaving Orvieto unscathed.

Our small B&B was near the eastern entrance of the city with a super friendly family running it that also had a small local eatery downstairs. After we got in, we were both hungry so we split a pizza downstairs and it was the best one we had in Italy. There’s nothing like eating at a local place instead of in a tourist area.

First visit was Pozzo-di-San-Patrizio, or St. Patrick’s well, a deep communal well built in the early 1500’s to supply water in case the city was besieged. What’s really cool is that there are two different, parallel spiral passages around the outside of the walls. The two different paths allowed mules to go down, fill up with water and then continue in the other parallel passage so there was never a problem with them meeting, while going different directions. The only problem is 248 steps….I think it will take me less time to write this blog post than it took to climb down and up. 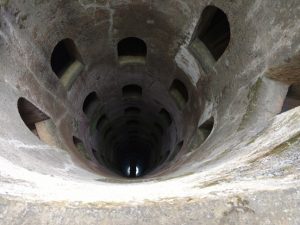 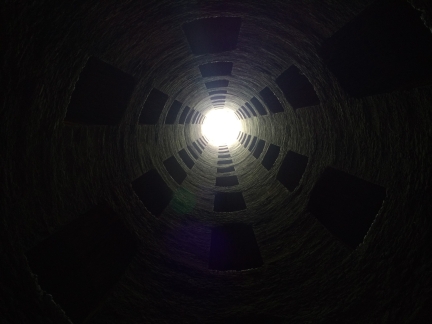 Pozzo-di-San-Patrizio in Orvieto from Bottom of Well

Perhaps the coolest thing about Orvieto is how far back it goes. It was settled by the Etruscans in pre-Roman times. Its location, on top of a tall volcanic rock, means it was virtually impregnable during ancient times. To create more living space and have room for animals in case of siege, the ancients dug a myriad of tunnels under the city. There are more than 1,200 tunnels according to most estimates although some new technology for sensing them indicates that there could be closer to 2,000. We did a tour of part of the cave complex later that afternoon with about 20 other people. The good news…19 of the group believed in personal hygiene. The bad news, one didn’t… a very friendly Dutch guy who no matter how far away we strategically positioned ourselves, always seemed to end up right next to us. Front of the group in one cave and there he is. Slowly drift to the back and damned if he didn’t end up right next us again. You could actually smell him before you saw him. 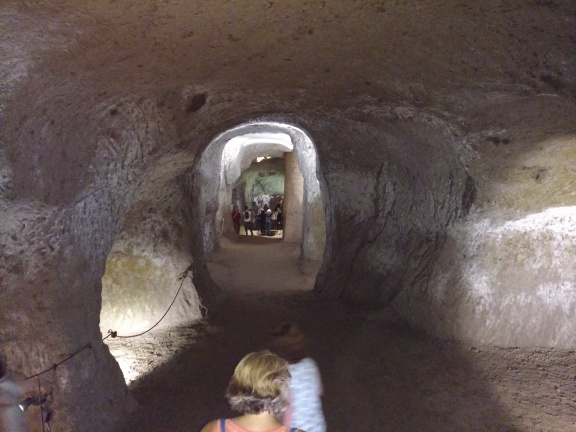 Orvieto is known for its massive cathedral, particularly unusual for so small of a town. Surprisingly inside, it’s not as ornate as other ones we saw in Tuscany and Umbria but it was still seriously cool. I’m sure the 13th century architects were going for “really cool” when they first put pen to paper, so mission accomplished. That evening we had a dinner from a little neighborhood osteria on a small piazza with a couple of really good local musicians doing rock and what we assumed was Italian folk music. Italy is so cool!

We turned in for what we thought was going to be a quiet evening until we start to hear drum beats that were slowly getting closer and closer to our room. We finally got curious enough to look outside our window and saw a procession going down the street directly in front of our room. 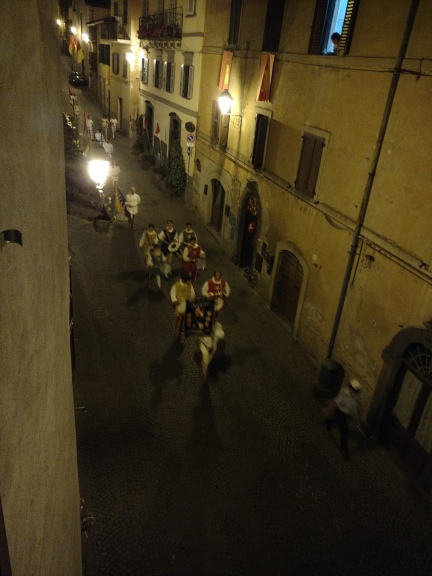 We never did find out what it was but the next days we saw various neighborhoods bedecked in local regalia, each area having distinct colors and patterns. Clearly they had something to do with the procession but being clueless tourists, we never learned what it was. 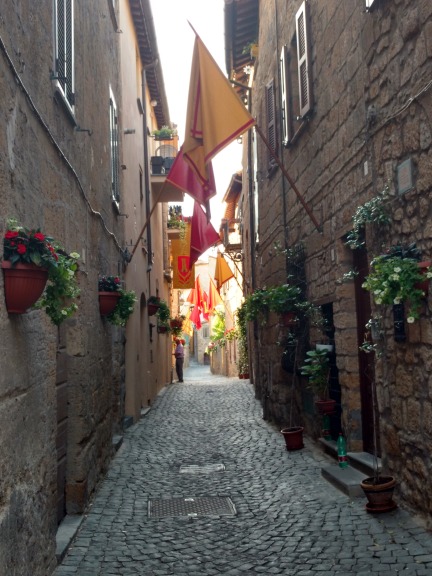 Neighborhood In Orvieto ‘Decked Out’ 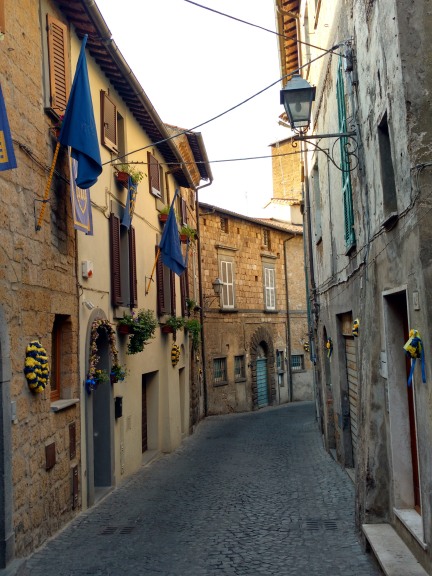 Another Neighborhood In Orvieto In Its Traditional Colors

The next day we wandered down the steep sides of the town to the lower region where the Etruscans created a Necropolis (Greek for “City of the Dead”). We’d call it a graveyard. It was really hot that day, so after a beer (or two) at the roadside stand at the entrance of the Necropolis, we walked back up hill and checked out the museum in another cave complex and then went through several museums attached to the Cathedral.

Tomorrow…off to Rome, the Eternal City!