We’re back after a lengthy absence which we’ll get into at some future date and we finally have had time to start exploring new wineries again. The first on our list was Wargin Wines in Santa Cruz County. 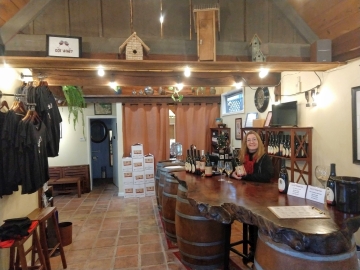 Wargin Wines Tasting Room in the Quaint Village of Soquel

Their main tasting room is in Wastonville but they also have a small one in the quaint town of Soquel. This was the one that we visited.

We first met Mikael Wargin when he was the vineyard manager at Burrell School winery, about 20 minutes up Soquel-San Jose road. We’ve crossed paths a few times over the last ten years or so and have always wanted to try the full experience of his wines but just recently found the time. What we didn’t know was Wargin Wines offers one of the broadest selections of Italian wine Varieties in the Bay Area. A few of these are so rare that very few Americans will have heard of them including, I have to sheepishly admit, us. We’ve actually tasted twice recently at Wargin, once in June for Karen’s birthday with our son, Daniel and his girlfriend Esra and just last weekend with Jason, a good friend from Australia. The result…lots of interesting samples, a new wine membership (like we really needed one more), and about 40 more bottles that we don’t really have room to store. Oh well…life is full of sacrifices I guess. Our guide for the first half of the tasting was Co-owner Denise. Mikael was doing a radio interview for a small public station in Santa Cruz. At least that was the goal but we seemed to hear a lot more of the interviewer than the interviewee….hmmm. Mikael returned for the 2nd half of the tasting so we had “Dueling Wargins”.

One of the first things you will notice is the creative labels. We assumed they were done by a single artist but they have used several tattoo artists to create an eclectic and unique mix of labels.

The Lineup of Wargin Wines

We started with whites of course and the two that stood out were the Pinot Gris, the French (and original version) of Pinot Grigio and a very unusual wine we’ll get into next. Not a lot of California wineries make Pinot Gris, preferring instead to make the far more ubiquitous (and I guess marketable) Chardonnay. Wargin’s version was everything a Pinot Gris should be…crisper than a Chardonnay and without overwhelming the wine with the buttery and/or Oaky flavors so prevalent in many California Chardonnays. That’s fine if you like oak and butter but it’s nice to have something a little different as well. This is a perfect wine for fish or lean poultry, either grilled or seared with a light pan sauce. We bought a few bottles and Karen wanted more but they didn’t’ have enough local stock so we cleaned out what they had. Next up was one of the weirdest white wines I’ve ever had, called Grecco di Tuffo (or Grecco for short). Grecco is grown in a very small area in southern Italy on the back side of a single volcano (reportedly Mount Vesuvius). The folks at Wargin believe there is only one small vineyard planted in California in San Benito County where they get their grapes. If you were to pour this wine and didn’t know what it was supposed to look like, you would swear that it’s a Chardonnay that has gone bad. The color looks amberish-gold which is almost never a good sign for wines and the aroma…let’s just say it isn’t like any other white wine we’ve experienced, having a hint of a Madeira to it, which also isn’t usually a good sign. The taste however is something entirely different. It’s quite full bodied and has a viscosity that is rarely seen in white wines (or even red for that matter). I’d love to try and describe it in terms someone else would understand but I am at a complete loss to do so. It’s unlike any other wine I’ve ever had and, with the exception of Karen who just thought it was OK, everyone else quite enjoyed it. Dannny and Esra even joined the wine club because of it. I would treat this wine more like a red for serving temperature, erring on the warmer side rather than the cooler side.

Next up, the Big and Beautiful, and aptly named Italian red blend of Montepulciano, Sangiovese and Freisa. There is a bit of a yin and yang vibe going on with the Big and Beautiful. On one hand, the Sangiovese imparts a slight fruit forward flavor while the Montepulciano and Freisa give it a depth lacking in many Sangioveses. This was one of Karen’s favorites. After a quick sampling of a couple of Petite Sirahs which were good but I’m kind of over them, we tried the Aglianico, an ancient Italian wine grape thought to possibly have origins in Greece. This was one that I was waiting for and I wasn’t disappointed, but I kind of cheated because I had the Aglianico the first time we were here and guess what…it’s good, but of course that is probably not a surprise because I just told you I was eagerly awaiting this one. If you like full bodied wines, this is one to try.

In addition to the litany of wines mentioned above, Wargin also makes…get ready for it…a third Petite Sirah, Freisa (delicious by the way, if you like full bodied wines with a nice tannic structure), Negrette, Montepulciano, a Zinfandel, and unusual red wine called Sagrantino which I haven’t even had time to research yet (although I think it comes mainly from Umbria, just south of Tuscany), two late harvest wines: Pinot Gris and Petite Sirah as well as a Chardonnay done in a “port style”. Between the Sagrantino and the Grecco, I need to create two more wine encyclopedia entries on the reference side of the web site so I’m not really happy with Mikael right now. I’m sure I’ll get over it the next time I drink one of his wines though, which coincidentally is tonight…Pinot Gris with Jamaican Jerk Chicken.

In order to get the full “Wargin effect”, I suggest making a couple of visits to have a broader selection of wines than you could in a single visit. They have a few tables situated conveniently right outside the tasting room, if you’re taking lunch, which I strongly suggest you do. The wines are very reasonably priced, with only two bottles more than $30 for non-wine club purchases. They have some great specials for wine club members which, in addition to the really good wines, are probably how they sucked us in. However, we are pretty easy marks when we have good wines, so I guess joining was a fait accompli. If you are looking for something besides all of the standard reds and whites, give Wargin Wines a try. You won’t be disappointed.

Tasting Room Location (yes…after more than five years and several hundred blogs, we finally figured out that if we blog about a winery, it helps to put the address as well…no one ever accused us of being fast learners).

For both wine locations, check for expanded summer hours. 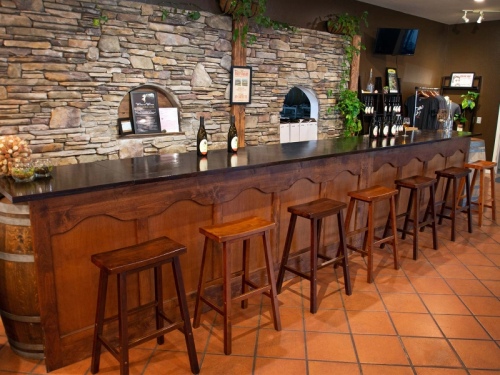