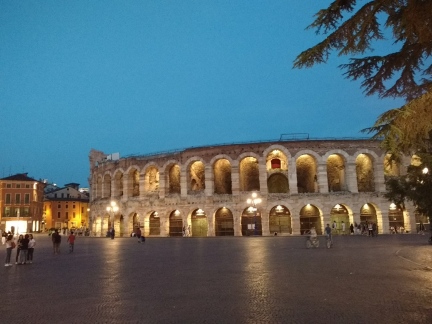 Night Time Illumination of the Roman Amphitheater in Verona

Day 5 and we’re in Verona. We’re here because the Maitre d at my favorite Italian restaurant in New York City is from Verona and said it’s a beautiful city and we had to see it. Karen of course adores me and so was willing to go along with whatever I suggested (I typed that after she proof-read it if you hadn’t guessed). Most Americans will only know Verona from a couple of Shakespeare plays, the most famous of which is Romeo and Juliette. Apparently most Americans also don’t know that Shakespeare wrote fiction but that didn’t stop the local, enterprising Veronese from capitalizing on tourists gullibility because there are two landmarks, one house called Juliette’s house and frankly a rather dumpy looking empty lot with more graffiti than a New York subway and at least a thousand cigarette butts called Romeo’s house. Apparently Romeo was not much of a house cleaner. Funky properties with dubious Shakespeare connections aside, the real star of Verona is the 1,900 year old Roman Amphitheater that is still in use today. It’s a little disappointing to go inside because it has cheap plastic chairs bolted to the ancient bleachers but then you realize that they have used it almost continuously for its 1,900 year life and that is just the latest aspect of its life. It’s stunning at night from the outside though. The next day we drove to Lake Garda. 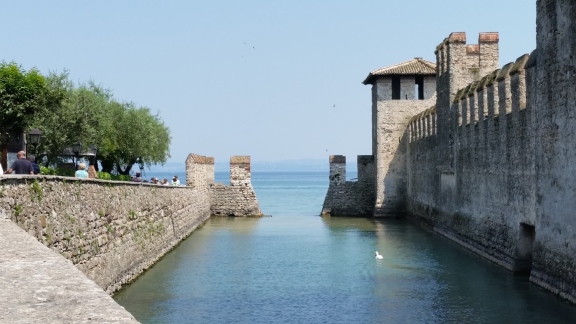 It reminded us a little of Lake Tahoe but it’s not nearly as high. We really wished we brought our swimsuits even though the water looked pretty cold. The weather was hot enough that it seemed pretty inviting.

Next up, Bergamo… a hill town that’s still surrounded by the medieval walls. Ken heard about it when he was in Italy on business in February and it was recommended by a local so what the hell. What a find! It’s far less touristy than either Venice or Verona and this place just screams “centuries old Italian cool”. Our hotel was on a street that was so narrow, calling it a rain gutter would be generous, but it was a beautiful old building with vaulted ceilings in all of the rooms set among some amazing gardens. 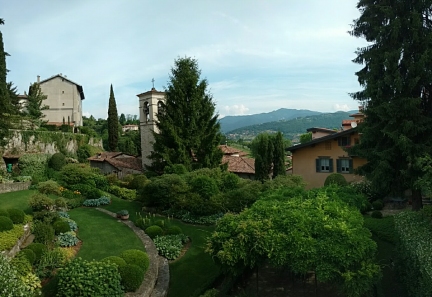 Gardens in and Around Our Hotel in Bergamo

We did a late afternoon walking tour with a local guide, of which the highlight was the Cathedral. Like most of them in Italy, it is centuries old but this one has several different “designer” touches that were added through the centuries which makes it the most ornate one inside that we have ever seen. The extravagant burial sanctuary of a long dead general stands in front of it. The guy had a seriously inflated opinion of himself because he added his crypt in front of the cathedral along with his crest which contained three testicles illustrating his perceived manhood.

Day 6 and Danny is really getting tired of semi cleaned sea food (fish with the head on…shrimp with the head, legs and fins on…) and risotto or as he expressed it, I’m really F*^&*%ing tired of rice. That whole wheat allergy/celiac thing sucks. Coming back from dinner we stumbled into and almost became an unintentional hazard in a night foot race. It clearly wasn’t too serious because a number of the runners were blatantly mugging for the camera.

A quick trip out to Lake Como followed the next day. Nice place but for the most part, we preferred Lake Garda. Karen continued to joke about wanting to see George Clooney but with Danny and me there, I don’t know what she thought she was missing? 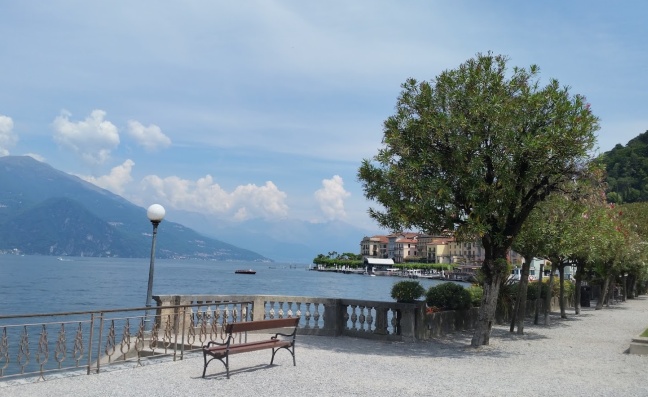