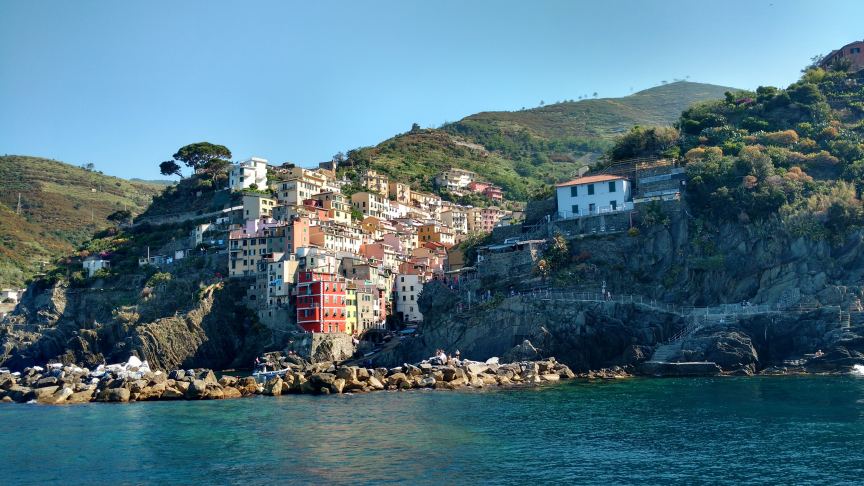 Bergamo was great and we were really looking forward to Cinque Terre.  Unfortunately, what we didn’t realize was that most of Western Europe had a three day weekend and the UK had a whole week off and you know what?  They all descended on the highway between Bergamo and Cinque Terre.  We fly for twelve hours to get away from California and we’re still stuck on a fricking LA-like freeway at rush hour.  What should have taken three hours took well over five.  Needless to say, patience is not one of Ken’s strong suits so beers and food were in order quickly, so we took the bus to Portovenere, a close coastal town that seemed like a good place to go.  The town would have been nice if everyone that was on that freeway hadn’t chosen Portovenere as their destination.  Can anyone say EuroDisney?

This was the low point in Danny’s culinary Italy adventure when he ordered a seafood dish and it looked like they pulled some big ass shrimp out of an aquarium, boiled them whole , threw a little curry on them and served them just after they stopped moving.  t sucked for him having a gluten problem.  Danny is definitely not squeamish about eating interesting things but that was the last straw.  He was so hungry after trying to find something to eat on the scrawny things that he ordered a steak. 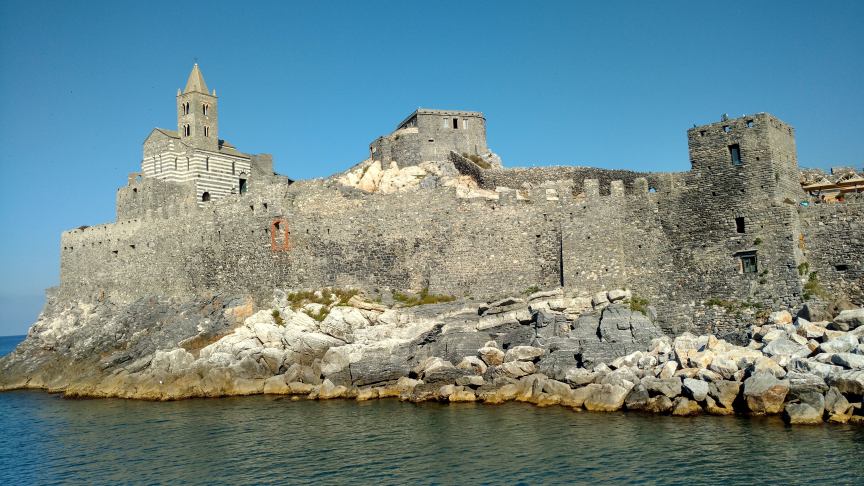 The best thing about Portovenere is the late 11th century church that is perched precariously on a cliff that looks like it could fall at any moment. 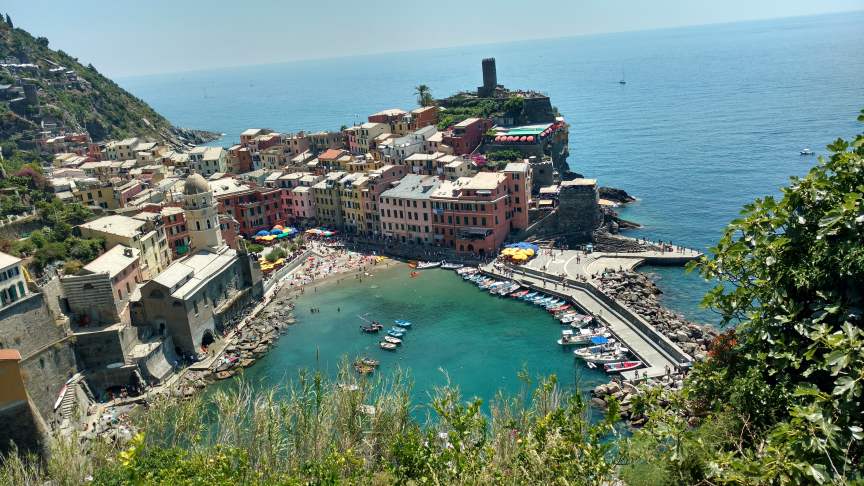 The next day we took a boat to Cinque Terre in the morning so we could do the hiking trail between the five towns that is roughly 12 kilometers long (and no, I’m not going to do the math for you…exercise your ability to use the internet and figure it out in miles if you don’t know the conversion).  We started with the toughest two sections, figuring that would give us time to cool down on the other two sections.  Holy crap…the first 7.5 kilometers between towns 1, 2 and 3 (Monterossa, Vernazza and Corniglia) should only be frequented by mountain goats.  I think I saw a couple of Sherpas with their packs struggling on the trail. 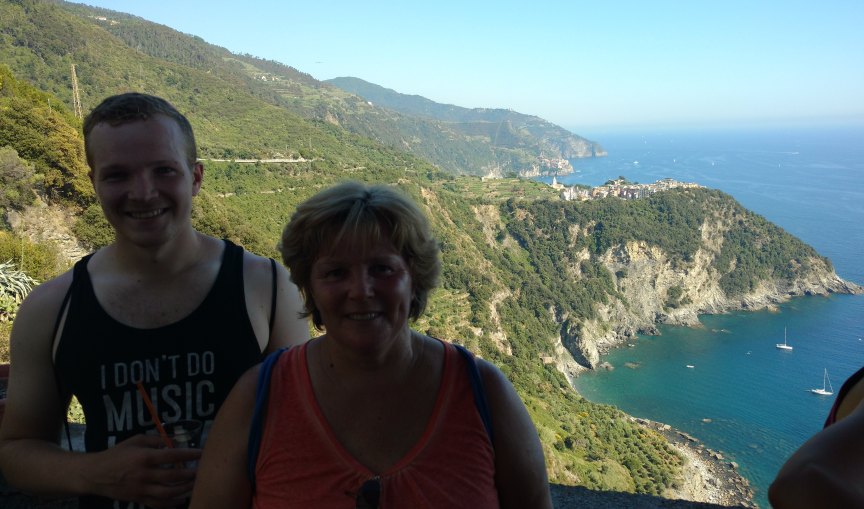 Karen and Danny Viewing Cinque Terre from Above.  One of the Locals Converted Part of Their House At the Top of the Hiketo to a Bar.  It Was REALLY Welcome!

Of course we also saw a 90 year old man playing sax for tips up near the top of one section so I might be exaggerating slightly.  Karen thinks he came out from one of the houses perched precariously in the hillside.  It was also one of the hottest days, contrary to the weather report which indicated a cool 20 degrees C (and yes, you can use the internet to figure that one out too if you don’t know that conversion).  The goal was to walk the whole trail because the best views of the five towns are from above and apparently Italy hasn’t discovered flying boats yet so you have to walk. 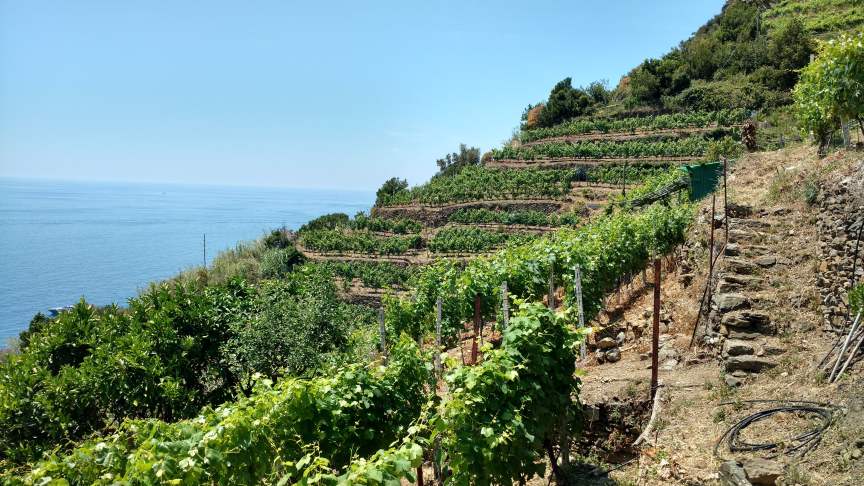 Wine Terraces Cinque Terre.   The locals have carved the most amazing terraces to grow wine grapes and olives out of almost cliff-like hills

Here’s what sucked.  We did the part that was clearly designed to punish sinners as one of Dante’s circles of hell without realizing it.  The two last parts that should have been the shortest, flattest and easiest ended up being closed due to unsafe conditions.  You have to be kidding me!  We did the parts that would make a Navy seal cringe and now we can’t finish the whole trail?  This called for a drink and some food.

We found a small, quiet piazza in Corniglia and while we were trying to decide which place to eat, Danny saw “gluten free Pizza and Focaccia” on a sign board.  Our decision was made.  He was so excited he ordered both a large focaccia sandwich and a pizza and with minimal help from Ken, crushed both of them in about 20 minutes and then declared it the best day of his life….seriously…those were his exact words.  Unfortunately, because we used up so much time on the tough part of the trails and got a later start than we would have liked, the last two towns were kind of a “blink and you miss it” tour by train.  It’s a shame because from the limited parts that we saw, the other two towns were worth spending some time in.