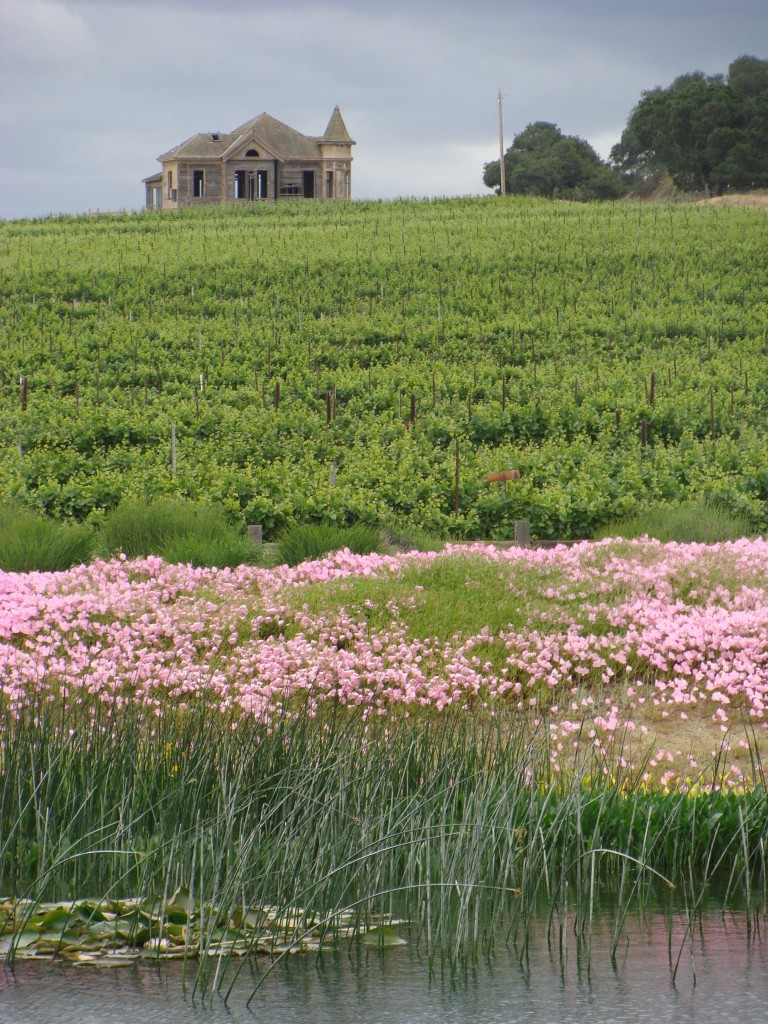 General Location:
The Santa Lucia Highlands is a long, narrow wine region to the west of Highway 101, approximately 90 minutes south of San Jose, CA.  It can be reached from Highway 101 exiting from any of the roads in the towns of Greenfield, Gonzalez or Soledad (careful though…one of them also leads to Soledad Correctional Facility…I doubt you’ll get much wine tasting done there).

Details:
For those of you who are regular readers of our blogs (hell…we must be up to double digits by now), you’ll know we have a soft spot for Pinot Noirs from the Santa Lucia Highlands (SLH for those in the know). This is probably the trip I’ve been most looking forward to for months. There’s a subtlety to the Pinots that many other areas just can’t match. I know Carneros and Santa Barbara are arguably the two areas in California that get the most press for Pinots, but I’ll take a well made Santa Lucia Higlands Pinot Noir any day.

So why isn’t the SLH more well known? Location, location, location. It’s in Monterey County but instead of benefiting from tourist areas like Monterey, Pacific Grove and Carmel, it sits on the west side of the Santa Lucia Mountains, a rugged section of the Coast Range. Rather then the stunning coastal vistas of California’s highway 1, it sits just off of the rather “workmanlike” highway 101. The closest cities are the farming communities of Gonzalez, Greenfield and Soledad. Higher end restaurants are non-existent and there are very few hotel rooms. The closest luxury accommodations are in Monterey, roughly a 45 minute drive which includes the windier portion of highway 68 and of course, less than 90 minutes south are the hundreds of wineries in the Paso Robles area. All this adds up to a region that is sorely lacking the visitors it so richly deserves. A number of the wineries have recognized this problem and have put tasting rooms in Monterey and Carmel. While you can taste the wines there, you can’t experience the character of this unique AVA.

Tasting with us was Justin, our 27 year old son: well, actually Karen’s son…my step-son. Normally we don’t really bother with the whole “step” thing unless I decide to remind Karen that I’m not old enough to have a 27 year old. She invariably will remind me that I am full of crap. One of these statements is true and I’ll leave it up to the reader to deduce which is which. The day didn’t start out too auspiciously due to a speeding ticket I received on the way. I guess I shouldn’t have been so excited to get there.

On this particular day, even though we were well into Spring, the weather was doing its best impersonation of a seriously crappy Winter day. There was just a touch of rain but what we lacked in moisture, we made up for in winds that threatened to blow even my ever expanding rear end down the hill of our first stop. 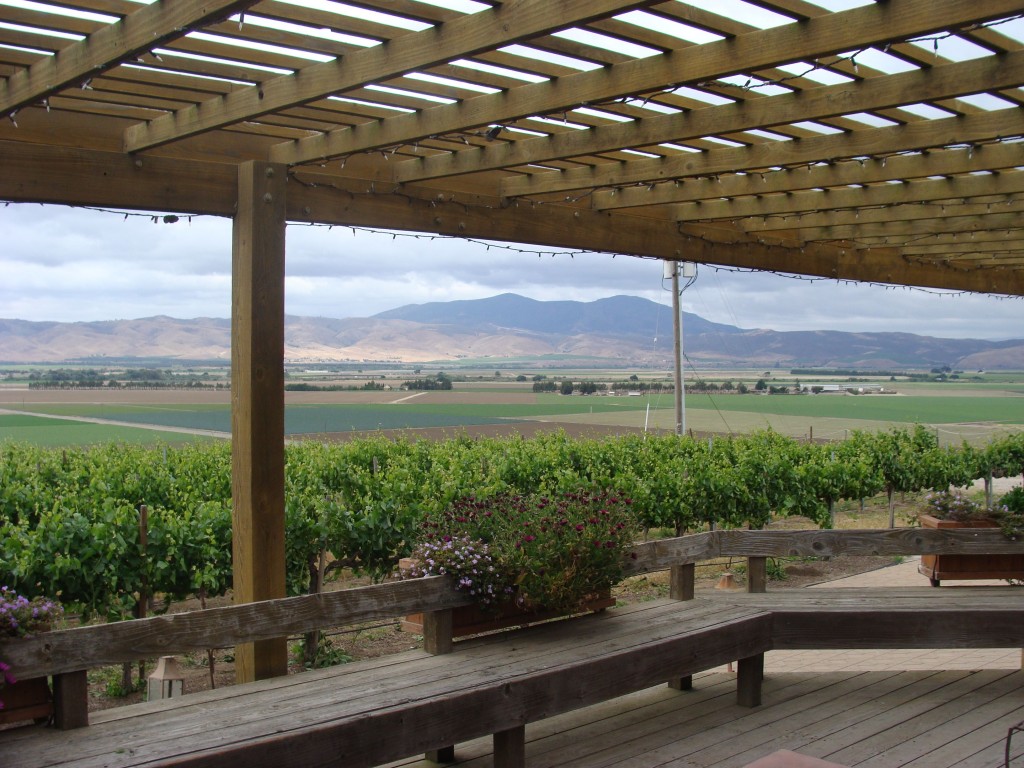 Paraiso Vineyards, is a larger family owned winery at the southern end of the SLH. The Smith family is one of the primary vineyard management companies in the area and a number of years ago, decided to get into the winemaking business and Paraiso was the result. Paraiso makes exclusively estate wines which is quite unusual for a California Winery and also make one of the few dry Rieslings around. It was light, had good balance, with just a hint of sweetness that complimented the acid that can define a dry Riesling’s character. The Pinot Noir was the real reason we came the SLH though, and at Paraiso the two that we tasted were both light, well made versions typical of this cooler weather AVA. Justin and Karen liked the estate better, but I found the West Terrace to have a little more character. The Estate is a very good value for a well made Pinot at $25. Last up was the Irie Zinfandel, technically not a Pariaso wine but one made by an extended member of the family. Karen and Justin liked it quite a bit. It didn’t do much for me, but I’ve not been into Zins lately, so I think my apathy had more to do with a general malaise about Zins. Because there aren’t a lot of tasting rooms in SLH, we asked our host, Emily who we should go see next. She recommended Wrath Vineyards. We’re very glad that she did.

Technically Wrath doesn’t sit in the SLH but actually just across River Road, the eastern boarder of the SLH in this area, but most of the wine grapes come from the SLH so we are counting it as an honorary member. Wrath specializes in Chardonnay, Pinot Noirs and Syrahs and if you’ve never tasted one of them, you are missing out on some of the best available. Our hostess, Michelle, ably guided us through the tasting and opened a couple of special bottles as well. Usually we’d go on for a while about the wines that we thought were stars but that would be pointless here. Every wine was very well made and thoroughly enjoyable. The Ex Amina Chardonnay was lighter than most California versions and didn’t undergo any malolactic fermentation which usually softens the wine but it did sit on the lees (yeast and other sediments) for a while which imparted enough balance to make it extremely drinkable. Karen pronounced it a perfect “sitting on the deck” Chardonnay once she was able to pry the glass out of my hands (I really didn’t want to share). We usually share tastes when we blog because we tend to hit a few wineries and full tastes of each offering tend to render your taste buds comatose, but there are down sides when the wine is really good. Of the Pinots, Karen’s and Justin’s favorite wine of the trip was Ex Vite from Monterey County while I liked the Tondre best. We’ve had Pinot made from Tondre grapes at Silver Mountain Vineyards in the Santa Cruz Mountains and I’ve always enjoyed that one as well. Thankfully some one else agreed with me for a change regarding Syrah when Justin finally came around and agreed that the KW Ranch was fantastic while Karen liked the Doctor’s Vineyard (also very good). Oh…and just in case you think it’s just us that thought these wines were special, Wine Spectator gave them the highest score for a California Syrah in 2010. Not content with that, they followed up in 2011 with the highest score given a Pinot Noir.

Depending on the direction you are coming from, check out the old house that the Wrath owners moved from Monterey to avoid having it torn down – at least that is the story. I think they had a really serious release party for one of their exceptional wines and the house reflects the resulting damage. 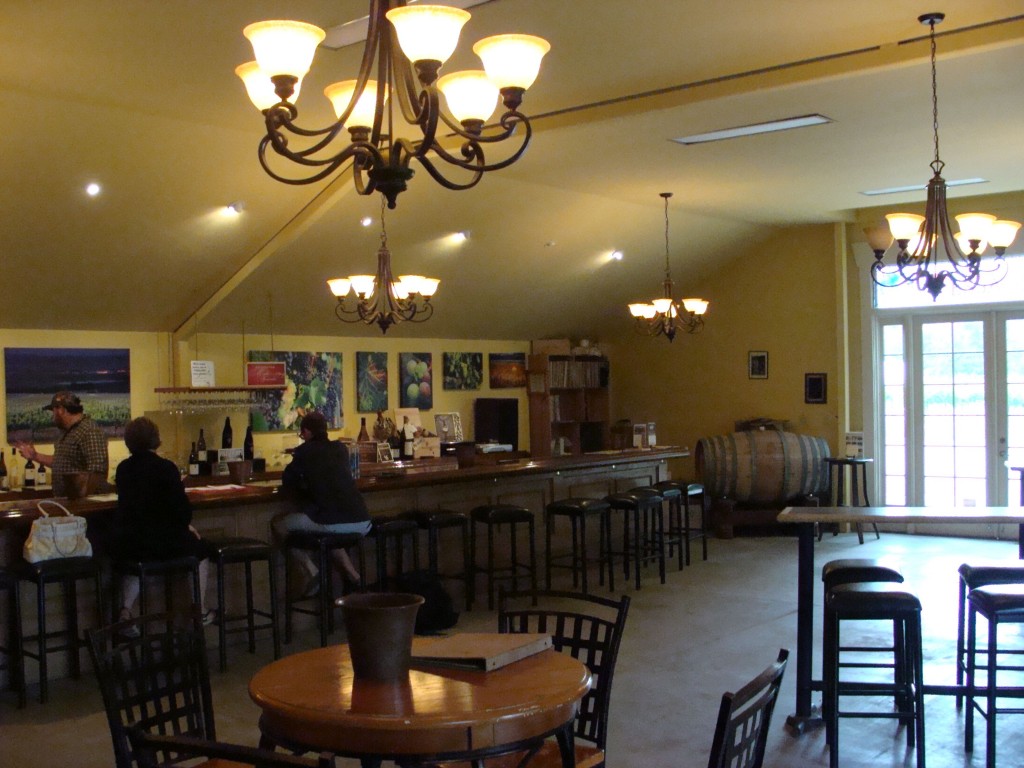 Pessagno was the last of our stops. The tasting room exudes a friendly vibe. It was empty except for us, mainly due to the abominable weather, rather than an attitude towards the wines, which were well made. There is also a patio off the side but the severe weather made any attempt to check it out pretty unappealing. The music comes from a record player… yes, a record player. For those of you under 30, picture a big black CD, the size of a dinner plate that was almost impossible to keep in perfect playing condition no matter how carefully you handled it. Records are more delicate than Justin Beiber’s ego. Accompanied by the sounds of Carlos Santana’s first album (OK even I am a little young for that one but it was still good), we enjoyed our wines. Most of Passagno’s fruit comes from the Santa Lucia Highlands although they do source some from San Benito County as well. The Idle Times Vineyard Syrah was a unanimous favorite although the dessert wine, the Pirelli, was also quite good. It wasn’t just a single note, sweet version of what many people are making for dessert wines. There was a depth of flavor, especially on the back end, that is usually lacking in these types of wines.

If you like Chardonnay, Pinot Noir or more robust Syrahs and you are driving between the Bay Area and Paso Robles or the LA area, do yourself a favor. Stop and sample the wines from this remarkable region. If you don’t like them, you just don’t like good wine. Check ahead before you arrive though because many of the tasting rooms are only open on weekends.

Winery-Sage.com Listings:
1) To view more information for the Wineries of the Santa Lucia Highlands (the local regional association), click here and type “Santa Lucia” in the “quick search” field to see their listing on Winery-Sage.com.

Thank you for visiting Winery-Sage.com, the online Encyclopedia of varietals, wineries, wine events and wine producing regions. If you wish to visit our main site to learn more about any of these listings, please click here; otherwise, we hope enjoy our blog section.